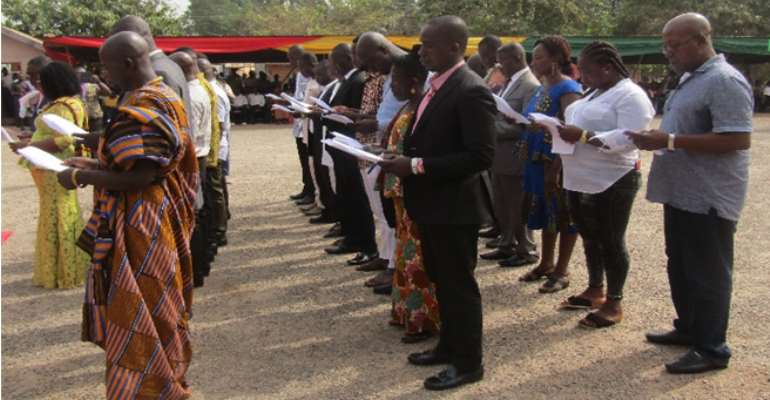 The Birim Central Municipal Assembly has failed to elect the Presiding Member at its eighth session of the Assembly at Akyem Oda in the Eastern Region.

At the first round of the election, Mr. Andrews Abrokwaa polled 13 votes out of the 28 ballot cast whilst Mr. Dadzie Solomon had 15 votes.

Since none of the contestants had the required number of votes to qualify for the position, the Electoral Commission in consultation with the Assembly postponed the election in accordance with the Local Government ACT 2016 (ACT 936).

Before the conduct of the election, 18 Assembly members-elect and other 10 Government appointees were sworn into office by the Akim Oda Magistrate Court Judge, His Worship. Akwasi Appaitse Abaidoo.

The Municipal Chief Executive (MCE) for Birim Central, Mrs. Victoria Adu in an address admonished the Assembly members-elect and government appointees to maintain close contact with their electorates and collate their views regularly to the General Assembly so as to deepen Ghana’s decentralization system of governance.

She described the role of Assembly members and unit committee members as sacrificial and informed them to be dedicated to serving their communities as and when the need arises.

She urged them to work hand in hand to ensure they mobilize revenue for the implementation and execution of the Assembly’s projects.

Mr. Godfred Yeboah Dame, the Deputy Minister for Justice and Attorney General who inaugurated the session on behalf of His Excellency Nana Addo Dankwa Akufo-Addo was of the view that Assemblies are a critical part of the government and for that matter needs to be managed effectively to improve the lives of the citizenry.

Mr. Yeboah Dame further urged Management of the Assembly to put in place pragmatic measures to implement government’s co-ordinated programmes initiated from 2017-2024 in order to create jobs for the teeming unemployed youth to improve their living standards.

Mr. Yeboah Dame encouraged the Assembly to use Town Hall Meetings and community engagement to create platforms for duty bearers to account for their stewardships and collate views from their electorates to deepen Ghana’s democracy by strengthening the participation of the local governance system to ensure the needs of the residents.

Mr. Yeboah Dame reprimanded the Assembly members and government appointees to corporate and work hard to mobilize Internally Generated Funds (IGF) for the Assembly and also educate the citizens on good sanitation practices to improve the sanitary condition in the Municipality and the country as a whole.

Nana Dwamena Akenteng II, the Oda Nkwantahene who chaired the inaugural program urged the honorable members to come together as one people with one common destiny to discharge their core mandates as expected to make the Municipality acquires more developmental projects.