CAR's Bozize says 'nothing prevents' him from contesting polls 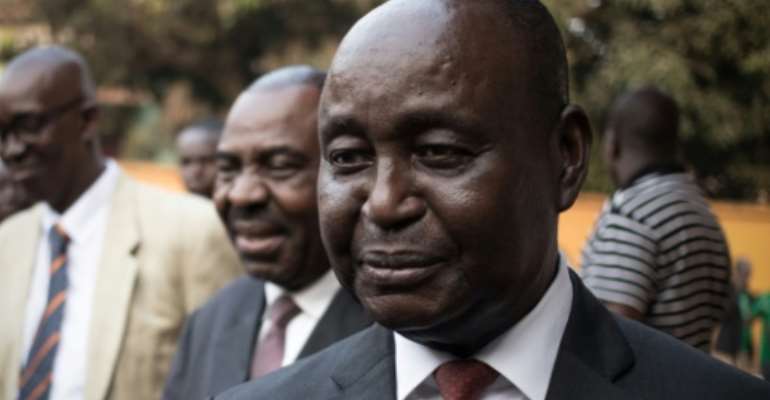 Bozize was ousted in 2013 and is under UN sanctions. By FLORENT VERGNES (AFP)

Francois Bozize, a former president of the Central African Republic who is under UN sanctions over the country's long-running conflict, said Monday he could contest presidential elections in December.

In his first interaction with journalists after returning from exile in Uganda in mid-December, Bozize did not spell out if he would be a candidate but stressed that he could not be barred from the top job.

"Nothing prevents me from being a candidate... according to official texts. That depends on my party. It's the party congress which designates candidates," he said.

Bozize, a Christian, took power following a 2003 coup before being overthrown 10 years later by Michel Djotodia, head of the mainly Muslim Seleka rebellion in the predominantly Christian country.

Vicious sectarian violence ensued between the Seleka and vigilante militias dominated by Christians and animists known as the anti-Balaka, forcing nearly a fourth of the country's 4.7 million population out of their homes.

The United Nations imposed sanctions against Bozize and CAR issued an international arrest warrant accusing him of crimes against humanity for allegedly stoking the violence.

"The events concerning the anti-Balaka happened during my absence and everyone knows that," Bozize said, adding that he would ask the UN to review the sanctions against him.

"Now the situation has evolved considerably and it doesn't seem to me to be fair that I should be subjected to these sanctions forever."

More than two-thirds of the former French colony is still under the control of armed rebel groups fighting over its rich mineral resources.

Bozize said he had returned in "a spirit of apeasement" and asked for "forgiveness .... for all the mistakes committed by me."

Djotodia, the man who ousted Bozize, has also recently returned to CAR, setting the stage for high-stakes political chess ahead of the December elections.

Djotodia remains the political head of the CAR's main armed rebel group, the Popular Front for the Rebirth of the Central African Republic (FPRC).

The group maintains control over the northeast of the country with violence including killings, looting and rapes, according to Lewis Mudge, Human Rights Watch's CAR director.

The run-up to the elections is thus potentially explosive in a country still embroiled in a conflict despite a relative calm since a peace accord was signed in Khartoum last February.