Two Fingers In Thy Mouth, Five In Thy Rectum: The Chronicles Of Nana Addo, The NDC And The People 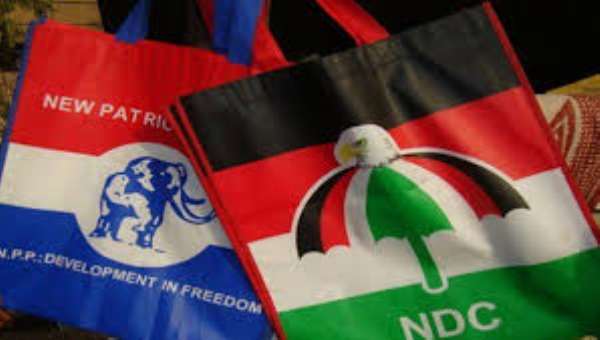 “The chick that will grow into a hen can be spotted the very day it hatches”...this was Okonkwo’s fear with the arrival of the Europeans in Nigeria in the late Nineteenth Century as captured in the Novel, “Things Fall Apart”. The cry of Okonkwo was borne out of the conspicuous danger the African Culture was due to suffer from the imposition of the White man’s culture and religion on the African. It’s much the same way the actions of the Nana Addo led government and the growing levels of impunity today are a reflection of what was shown the Ghanaian people when NPP was in opposition and immediately they assume power in 2017.

The formation of militant groups (invincible forces, delta forces, etc) to serve as parallel forces of the security agencies in Ghana while in opposition is a sign that with state power to control and expend resources, they can do anything to anybody and still call the bluff of the Ghanaian people. After testing their two fingers in our mouths and never got bitten, they will surely put the five fingers in our rectum and play with our intestines and lungs.

Once nobody got fired and nobody saw the need to apologize and take responsibility for stealing parts of speeches of three Presidents for Nana Addo to read to the Ghanaian people and the world, we were being told to prepare for their worse. The embarrassment that greeted us with this incident is still fresh in our minds. That was the beginning of the test of the patience and tolerance of the people.

The NDC and the Ghanaian people should never expect President Nana Addo and his NPP to do anything better than the display of arrogance, vindictiveness, abuse of power, broad day robbery from the public purse, harassment of dissenting voices, intimidation and the return of culture of silence among others. The show of excessive forms of tolerance to the above serves as a fertile ground for them to firm their grips and beat the hell out of us.

To my NDC comrades and the genuine dissenting voices, get prepared for the worse. The harassment of John Mahama out of his official bungalow with the excuse that Dr Bawumia (VEEP) was homeless but finally got the Senior Minister to occupy the same bungalow should have signaled us that this battle won’t be cool. They are currently chasing Chairman Ofosu Ampofo around over leaked tape while the real threats to the peace of this country are serving in sensitive positions in government. All these are testimonies to the fact that we the flies who chant around without any grounding can easily be crushed without stress. So what surprises you when Sammy Gyamfi got ambushed and ultimately arrested after a TV Program? If we didn’t see this coming then, we are some jokers in this redefined democracy of Akufo-Addo.

The beating of ACP Nanka Bruce at the seat of government by the militants of the NPP was a message to the police force that the invincible forces now have power over them once Nana Addo is President of Ghana. The Ayawaso West Wuogon show at the by-election was an equally a message to the Ghanaian that the 2020 election might be a battle of the strong and not ideas. Today, Double and his gang of militants operating as National Security Operatives are paid with our taxes after the government threw the Emile Short’s recommendations to the bin. Do we have a National Peace Council?

The disruption of court proceedings in Kumasi by the Delta Forces and the subsequent filing of no case by government should have told the Judiciary that “contempt of court” was being redefined by the NPP and applied as they defined. Those Delta Force Militants are walking free and living at the expense of the taxpayer while an arrest warrant is served on Kelvin Taylor by a Judge. The open attacks of Hon Kennedy Agyapong on the Military for refusing to employ his over 100 NPP boys into the service without following the recruitment procedure is a clear indication that the respect for the barracks is about to be waived. Who doesn’t fear and respect the military uniform?

The killing of Ahmed Hussein-Suale and its attended challenges; the threats on the head of Anas Aremeyaw Anas, the Internationally Celebrated Investigative Journalist; the threats on Manasseh and his subsequent exile; the threats on Edward Adeti for exposing corruption in NPP government and the several cases of intimidation and open attacks on Journalists and media houses for doing less of what they did to the Mahama administration marks the return of the culture of silence in multitudes. Is it the case that the media is enjoying this and are only interested in reviewing Ananse stories on their shows, interviewing Fake Prophets and not the protection of its members? Once Kennedy Agyapong and the NPP succeeded in deliberately denting the image of an award Winning Investigative Journalist like Anas, the rest of the media men and women are just like carrots who can be chewed without boiling.

As businesses are struggling to break even; as importers are struggling with rising BPs because of the depreciation of the cedi and ever increasing port charges; as the trotro driver is making up with the unannounced increases in prices of petroleum products; as the banking sub-sector is sinking and employment shrinking in alongside; and as the suffering Ghanaian continue to suffer in solitude, the Electoral Commission of Ghana is bent on blowing several millions of dollars on a register almost 40 CSOs, several political parties and majority of Ghanaians said they don’t need. Even when their lame explanations and ever-changing narratives are further exposing the selfish intentions, the NPP’s General Secretary, Mr John Boadu came to announce the date for the commencement of the exercise. The worse scenario is even that the Emile Short led Eminent Advisory Committee’s request for a meeting with EC and the IPAC has angered the EC to come out to corroborate the announcement made by John Boadu on the date for the said exercise. If this is not arrogance, if this is not abuse of power, if this is not disrespecting, if this is not insensitivity, then I am still looking around to find any reasonable but sound description of the EC’s actions.

Ambulances are parked for close to 5 months because the President want to cut a tape in a ceremony organize with taxes, and not even the noise from the Ghanaian would get the government sensitive. An innocent medical student had to suffer arrest for a harmless protest before the University of Ghana Medical Centre got partially operationalized. As we speak, the Ghana Maritime Authority and the Bank of Ghana Hospitals are locked up without explanation. Are we contend with the no bed syndrome and the pain and frustration many a pregnant woman go through in Korle Bu and 37? Several hospital projects have been abandoned and not even the call from chiefs will sound any meaning in the ears of the President and his appointees. Some selected road projects which were ongoing have been suspended with the excuse that some auditing were being done and for three years now, no audit report has been published and work on those roads have not commenced. Is the Ghanaian this tolerant or Mahama was just not lucky?

Appointees who hitherto were ordinary dependents are now overnight rich men who call all the shocks in towns and villages. Their flamboyance and opulence are put on stages without fear. The President is flying private jets at a cost to the taxpayer and his cousin is directing government agenda out of government. The NPP senior members are openly declaring their intention to steal the 2020 elections on talk shows and not at cabinet meetings. All these have passed the test for the real show in December 2020.

Perhaps, the show put out by the NPP militants at Ayawaso West Wuogon by-election and the statement by the majority leader in Parliament to the effect that with the compilation of the new register, the NDC will never win an election in this country might just be as dangerous as the operations of terrorists groups in Somalia. And this must be worrying to the Ghanaian than the so called leak tape from Chairman Ofosu or some so called cyber crimes by Sammy Gyamfi.

To my NDC comrades, no amount of press conferences or releases from our council of elders will get the NPP to be democratic and sincere during election 2020. No amount of exposing corruption in this government will stop them from engaging in same acts now and forever. The language the NPP understands is different from the language the NDC is speaking now. Why not stiff boycotts? Why not simultaneous peaceful demonstrations across regions? Beware! The second coming of Nana Addo will witness the highest form of impunity in Ghana. If we are lucky, they will only chase all of us into exile and sell this country to the Danquah’s so we can serve as refugees in other countries in peace.

Get down from your gentle horses and act as citizens. I know the NDC love this country, and I know the NDC will be the last to pray for any instability, but that shouldn’t serve as our weaknesses. We need to rescue this country and this must be a civic duty to all of us.

I am a patriotic citizen! Shalom!

Bishop Dag apologises to Otumfuo over 'offensive' sermon
14 minutes ago

There's power in a father's encouragement – Pastor Otabil
14 minutes ago