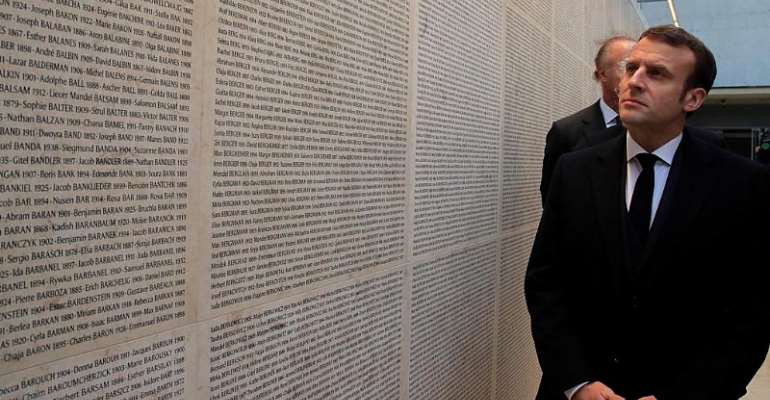 French President Emmanuel Macron has paid tribute to the victims of the Holocaust on the 75th anniversary of the liberation of Auschwitz, urging the world not to "give in to the intolerable rise of anti-Semitism."

"The memory of the horror must never be forgotten," Macron told an audience of some 200 people, a quarter of them Holocaust survivors, at Paris' Shoah memorial museum on Monday.

The French President was speaking after unveiling a new memorial wall of names commemorating the 76,000 French Jews who were deported to Auschwitz-Birkenau.

More than 1.1 million people, primarily Jews, perished at the Nazi death camp in Poland, either in gas chambers or from starvation and disease.

"The Holocaust must never be allowed to heal," Macron continued. "It should remain a gaping wound in humanity's side. Our vigilance must constantly be sharpened by our memory."

The Auschwitz-Birkenau death camp was liberated on January 27, 1945, by Soviet troops, who discovered 7,000 survivors upon their arrival.

Seventy five years on, a handful of ageing Holocaust survivors joined world leaders at the concentration camp in Poland on Monday to testify about the horror of the past and to tell the world not to forget, amid concerns over a global resurgence of anti-Semitism.

Veteran campaigner Shimon Samuels recognizes these masks all too well; director for International Relations at the Simon Wiesenthal Centre in Paris, he has spent years researching the Holocaust in society. He reckons that the weakness of Holocaust education may be to blame for anti-Semitism.

"The Holocaust is 6 million Jews so it is Jewish but it isn't just a Jewish issue. There were also Slavs, Poles, Roma, gays," he said insisting on the tragedy's universal nature.

"I'll never forget the evening I was seated in a circle of intergenerational survivors: native Americans, Armenians, Jews, Cambodians, Bosnians, Tutsis in Kigali, a few months after the Rwandan genocide. And each one of us told stories and they melted into each other. There was no pecking order. It was only a communion of tears," he told RFI.

Revolving door of justice
While the French president has stressed the importance of Holocaust remembrance to combat all forms of racism, Samuels reckons commemoration is being used as a placebo instead of treating anti-Semitism.

"You have all of these wonderful ceremonies with plaques on walls, but on the other hand, you also have a revolving door of justice" he said, referring to the case of Sarah Halimi, a Jewish woman who was killed by her Muslim neighbour in 2017.

Last December, a court ruled that her killer was too high on marijuana to be responsible for his actions and the case was dropped, sparking outrage in the Jewish community.