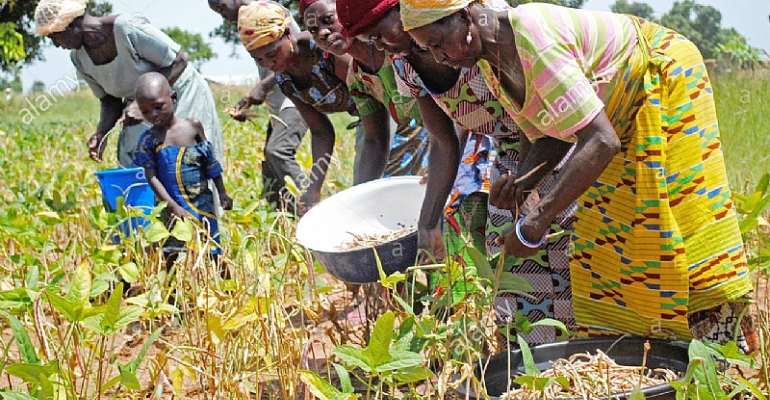 Lack of access to farmlands is affecting the implementation of the government's Planting for Food and Jobs (PFJs) programme in the Sunyani West District.

The ModernGhana reporter observed that about 90 per cent of the women farmers in the area were settlers, making it difficult for them to access lands to engage in large scale farming.

This, situation according to the "Kantro Mmaa Nkabom Kuo", (KNK) a farmer-based organisation in the district was discouraging many of the PFJs to continue with their farm work.

Currently, the women farmers are engaged in a system they described as “Domenkye” where they agreed with landowners, acquire farmlands and share proceeds with the owners.

"This traditional system does not favour us because we do not get enough profits from our farm business", Madam Theresa Darpine, the Chairperson of the KNK told our correspondent.

In an interview Mad. Darpine advocated increased or equal access to farmlands for women and other vulnerable groups in the District.

She called for reforms in the land administration system in the country to enable women farmers to access farmlands and expand their farming activities to sustain the PFJs initiative.

He said BUSAC fund has given 362 advocacy grants to various business groups and associations in the country and commended the fund for its efforts towards creating sound environment for the private sector to thrive.

Mr Gilbert Sonpki, the Sunyani West District Director of Agriculture, said the PfFJs had created opportunities for farmers to expand their farming activities and advised those who had not registered with the programme to do so.

Though he could not immediately give statistics, Mr Sonpki said more farmers had developed interest and had registered with the PFJs.

He advised the PfFJs farmers to come together and form groups to enable them to easily access loans to expand their farm work.