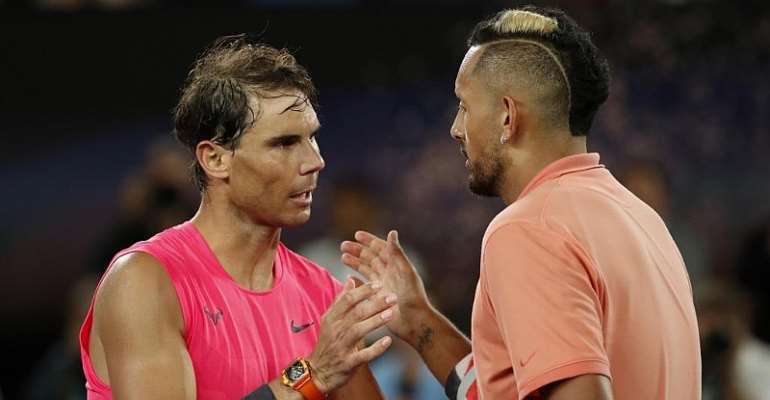 Top seed Rafael Nadal advanced to the last eight of the Australian Open on Monday after a four set victory over Nick Kyrgios.

"When Nick wants to play tennis, when he's focused on what he's doing, I think he's a very important player for our sport because he has a big talent," said Nadal.

The two men have a spiky history. Last year Nadal accused Kyrgios of lacking respect and Kyrgios reorted that Nadal was super salty.

Attitude
"I am never against his way or style to play," said Nadal after his triumph on Rod Laver Arena.

"When I criticised him in the past it's because I think he did a couple of things that are not right and are not the right image of our sport and for the kids.

"But when he's doing the right things, I am the first one who supports this."

Kyrgios, an avowed basketball fan, walked out for his eighth match against Nadal wearing a yellow LA Lakers singlet as a tribute to Kobe Bryant who died in a helicopter crash along with eight other people on Sunday.

"I don't think they make them like him any more," said Kyrgios of Bryant. "He was different, the way he trained, the way he did things, the way he played.

Kyrgios added: "The trouble for me is being able to actually just produce the same attitude over and over again. Hopefully I can keep doing it. I'm just taking it day by day, trying to be positive, just bring positive vibes."