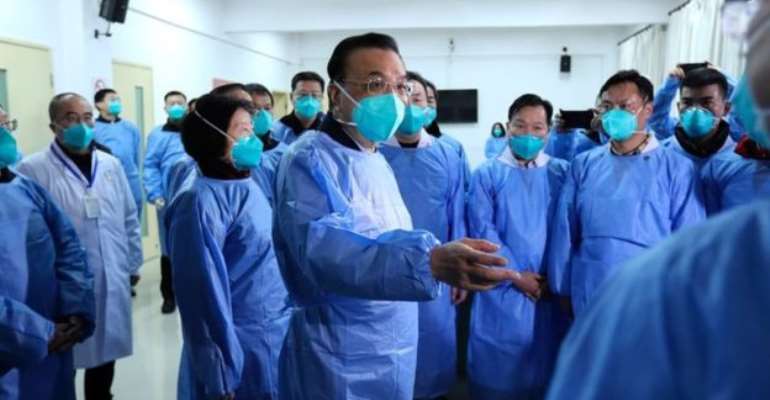 The number of people killed in China by the coronavirus has risen to 80, with almost 3,000 confirmed ill.

The national new year holiday has been extended by three days to Sunday, in an attempt to contain the spread.

On Monday, Chinese Premier Li Keqiang visited Wuhan, the capital of Hubei province and centre of the outbreak.

The number of deaths in Hubei province has climbed from 56 to 76, with four deaths elsewhere.

Wuhan is in lockdown and several other cities have imposed travel bans.

The overall number of confirmed cases in China is 2,744.

Some 461 are critically ill, while 51 people have been “discharged from hospital and cured”, the National Health Commission said.

The BBC’s Robin Brant in Shanghai says extending the main holiday of the year is a highly unusual move.

But after the pre-new year travel surge, the prospect of half a billion people getting back on trains, planes and buses and criss-crossing the country again is the last thing the government wants, he adds.

At least 44 cases have been confirmed abroad, including in Thailand, the United States, and Australia.

There have been no deaths outside China.
The coronavirus causes severe acute respiratory infection and there is no specific cure or vaccine.

Most of the deaths have been of elderly people or those with pre-existing respiratory problems.

What is happening in Wuhan?
Travel from the city, home to 11 million people, has been severely restricted and non-essential vehicles have been banned from the roads.

At the Hubei border, workers are checking people’s temperatures before allowing them into the province.

The province has suspended emigration services, meaning Chinese citizens have been unable to get new visas or passports.

The local government in Wuhan said no-one from the city had left China in the past four days. Some 4,096 tourists from Wuhan are still out of the country.

The emergency has overwhelmed Wuhan’s hospitals. More than half a million medical staff have joined prevention, control and treatment operations in the province.

Two new makeshift hospitals are being built in the city and factories are rushing to produce masks and protective clothing.

On Monday, Premier Li inspected the ongoing efforts, and spoke to patients and medical staff, a government statement said.

The city’s mayor Zhou Xianwang said the number of cases would continue to rise, and warned that around five million new year travellers left the city before the lockdown.

What is the situation in China?
New year celebrations were scaled back and four major cities – Beijing, Shanghai, Xian and Tianjin – have banned long-distance buses.

Extending the new year holiday until Sunday means schools and official institutions will remain closed for the rest of this week.

Beijing has closed the Forbidden City for tourists, as well as a section of the Great Wall.

In Guangdong province, several cities have made face masks mandatory in public. Both Disney parks in Hong Kong and Shanghai have closed.

Hong Kong, which has eight confirmed cases, has declared a city-wide emergency, with schools closed until 17 February.

Over the weekend, Chinese officials warned the virus was able to spread during its incubation period , making it harder to contain the illness.

In humans, the incubation period – during which a person has the disease, but no symptoms – ranges from between one and 14 days, officials believe.

What is the situation internationally?
According to the World Health Organization and national authorities, there have been at least 44 confirmed cases outside China.

Almost all had recently been to Wuhan or had been in close contact with someone who had.

Where did the virus emerge?
The virus is thought to have emerged from illegally traded wildlife at the Huanan seafood market in Wuhan.

Authorities have since temporarily banned the sale of all wildlife in China.

The virus itself is a new, or “novel” coronavirus – a family that normally affects animals.

Another variant, Sars, killed 774 people out of 8,098 reported cases during a major outbreak in 2003, which also originated in China.