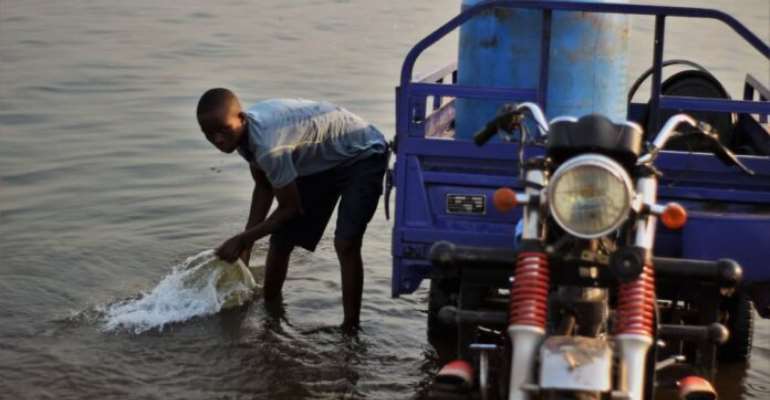 Residents of Kwahu Afram Plains South in the Eastern Region continue to struggle in their quest to have access to potable drinking water.

One of such communities in the District without potable water supply is Ekye- Amanfrom.

A Mechanized borehole constructed to serve the community with a population of about 12,000 by the Millennium Challenge Corporation in 2012 has been broken down for over a decade due to lack of finance to repair and also settle a GH10,000 debt owed Electricity Company of Ghana.

Residents have since been compelled to depend on polluted water fetched from Afram River for domestic use and drinking particularly those who cannot afford buying sachet water, exposing them to serious health risks.

Children as young as 10 years were seen staggering deep into the less disturbed portion of the river to fetch water at the peril of their lives.

“This is our only source of water, we use it for washing, cooking, and drinking because not everyone can afford sachet water. But this water is heavily polluted especially during the raining season, it carries all sort of contaminants including debris and human excretes but we have no choice than to drink. A resident told Starr News. 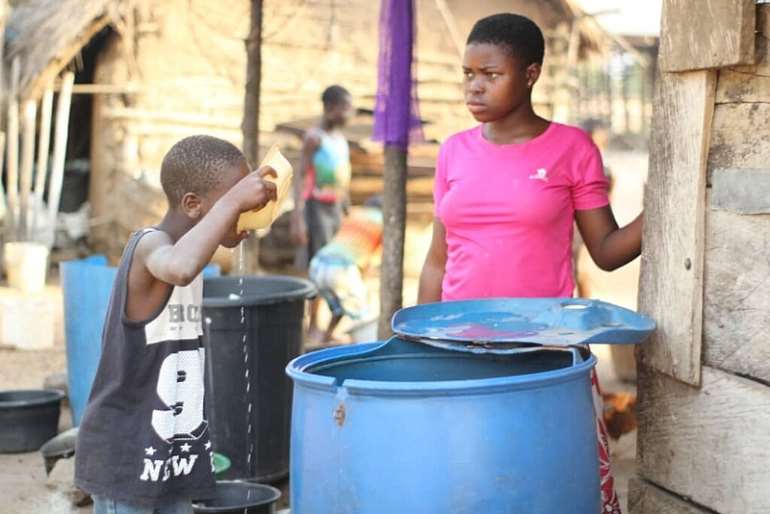 Another resident lamented, “we don”t have pipe-borne water here so we drink from the Afram River but this same river is where men in this community bath in with soap and defecate. Our husbands defecate in the river .so it is not wholesome for human consumption”

“if care is not taken waterborne disease can strike this community. The water is not hygienic”.

He said the only permanent solution to the chronic water challenge in the area is the construction of water treatment plant to treat raw water pumped from the fresh the Afram River for distribution to homes.

“Some residents ease themselves in the river. we discussed it on the assembly level, and I personally proposed that the water should be tapped from the main Afram River and treated and distributed to homes in this community and surrounding communities down through Maame Krobo but the Assembly said the cost will be too high therefore if we can get an NGO to support”

The Secretary to the Unit Committee Charles Sebi said the situation is very worrying. He called on NGOs and Government to come to the aide of the community.

” drinking of this water sometimes give us a lot of diseases .we need government health and then NGOs”.

Water provision to rural communities in the Eastern region is declining due to lack of funds for the Community Water and Sanitation Agency (CWSA) to provide safe drinking water to rural dwellers in spite of growing population.

Currently, about 1.1 million rural dwellers in the Region depend on unsafe water sources.

“Our rural population is a little over 2.5 million and so far we have only served about 1.4million. The unserved is about 1.1million. Currently, rural water coverage is 56% in the Eastern region and this is coming down because we are not adding more facilities but the population is growing. Somewhere last year it was around 56.23% but 23% has gone because we are not getting the money,” he said.

He added, “As at March 2019, we have about 2,997 boreholes with hand pumps across the region, 1,142 hand-dug wells, 35 small town pipe system, 6 limited pipe systems, 15 water harvesting tanks but many deteriorating due to lack of maintenance “.

Globally, Water scarcity affects more than 40 per cent of people, an alarming figure that is projected to be worsened by the effect of climate change. It has been predicted that, by 2050, at least one in four people will suffer recurring water shortages.

The Sustainable Development Goal six enjoins countries to provide safe and affordable drinking water for all by 2030. This requires that, Ghana increases investment inadequate water infrastructure.