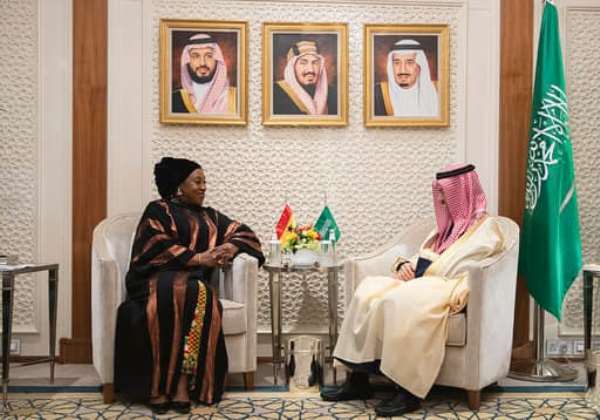 Ghana and the Kingdom of Saudi Arabia have taken steps to rekindle their long-existing bilateral relations.

The move, among other things, seeks to strengthen relations between Riyadh and Accra, with the aim of promoting trade and enhancing the existing mutual respect between both nations.

During the meeting held in Riyadh, both ministers discussed ways of improving the bilateral relations between Ghana and Saudi Arabia.

She assured Saudi authorities that the outstanding agreements between the two countries such as the General Agreement of Cooperation will be finalized by the government of Ghana for signature during President Akufo-Addo’svisit to the Kingdom in February, 2020.

The Minister recalled that Ghana and Saudi Arabia have enjoyed cordial bilateral relations which date back to the 1960s and indicate that since then, the bonds of friendship between the two countries have witnessed steady growth.

She added that Saudi Arabia is Ghana's oldest bilateral partner in the Gulf Region and that, Ghana’s relations with Saudi Arabia have paved the way for the expansion of its bilateral relations to the rest of the countries in the region.

The scope of Ghana-Saudi relations is mainly spread across the Energy, Agricultural, Educational, Transport and Health sectors.

Saudi Arabia, therefore, continues to remain a priority partner for Ghana in the region, according to her.

The mimister thanked the Saudi Government for not only extending scholarships to young Muslim students to study in universities in Saudi Arabia, but also offering through the Islamic Development Bank, annual scholarships to Ghanaian students to undertake courses in Turkish universities in Medicine, Pharmacy, Engineering and Veterinary Science, to enable them contribute meaningfully to Ghana's development.

She also thanked the Government of the Kingdom of Saudi Arabia for their contributions made to vital areas of Ghana's national development including education, health care, energy, road construction, as well as donations to build mosques, orphanages and provision of safe drinking water in Islamic communities in Ghana.

Meanwhile, Ghanaian President, Nana Akufo-Addo is expected to visit Saudi Arabia from the 7th to the 8th of February 2020.

His visit is aimed at further strengthening bonds between the Sean nation and its West African counterpart.

Prince Faisal charged the two sides to move urgently to finalize outstanding agreements between the two countries for deepened cooperation.