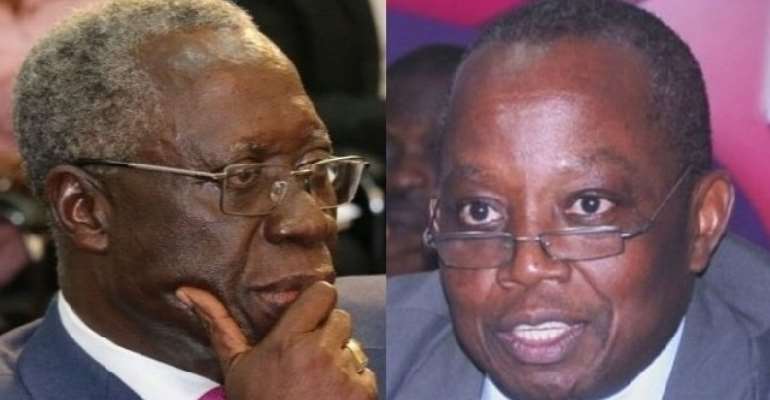 Senior Minister Yaw Osafo-Maafo has said the Auditor-General (A-G), Daniel Yao Domelevo, knows very well that he (minister) is not the rightful person to accede to the plea asking him for time in order to gather documents in the much-talked-about $1 million Kroll and Associates Limited surcharge case.

The minister and four officials from the Ministry of Finance who have been surcharged by the A-G have told Mr. Domelevo in plain language that the power to grant such a request is in the hands of the courts and not the appellants.

The appellants, in a letter from their lawyers, insisted that they are surprised that Mr. Domelevo has set out to beg them for more time to gather documents covering the basis for the purported Kroll Associates surcharge when it is the courts he is supposed to send the request to.

Lawyers for Mr. Osafo-Maafo and co in a reply to Mr. Domelevo's request letter which was leaked to the media ahead of delivery to the appellants, insisted that they did not believe they have the requisite authority to grant A-G the plea he is asking of them to grant and added that since A-G's 'deliberate' refusal to comply with the law is deemed as contempt of court, it would be reprehensible on the part of the appellants to grant that request even if they had the authority to do so.

The appellants insisted that granting Mr. Domelevo's request would amount to usurpation of the powers of the High Court.

The appellants said they duly invoked the jurisdiction of the High Court in accordance with Rule 5(1) and (2) of Order 54A of C. I. 47 as amended, by applying for the consequences of Mr. Domelevo's refusal to comply with the relevant rules of court to be affirmed by the court.

According to the appellants, they are unable to undermine the effect of their application by acceding to the request of the A-G as they do not believe they are vested with the requisite authority to do so.

They claimed that Mr. Domelevo 'deliberately or inadvertently' did not address the import of their application for contempt filed on 20th January and rather chose to rely on what they claim to be “a totally inapplicable rule in C. I. 47 as amended.”

The appellants insisted that the A-G “by this conduct continues to exhibit disdain and disrespect for the Honourable High Court and the law, thereby exacerbating the obvious consequences of his contemptuous conduct.”

The appellants said they were holding the firm position that even if they were enabled by any rule of procedure to grant any consent to ameliorate or otherwise waive the consequence of what they claimed to be the A-G's “deliberate non-compliance with the applicable legal framework,”they find it “potentially reprehensible” on their part to be asked by Mr. Domelevo “to overreach the court” in view of all the circumstances of the case.

Last week, the A-G reportedly wrote to the Senior Minister and the other appellants begging them for time to gather documents in the Kroll Associates audit case.

The A-G asked for the consent of the appellants to enable him to find documents to prove his basis of surcharging the government officials in court.

After surcharging the Senior Minister and co following the A-G's accusation that they authorized payment to Kroll and Associates for no work done, Mr. Osafo-Maafo and the four officials from the Ministry of Finance, namely Michael Ayesu, Abraham Kofi Tawiah, Eva Asselba Mends, and Patrick Nom, filed an appeal in court challenging the surcharge decision.

Although served with the process, the A-G refused to file a response and that compelled Mr. Osafo-Maafo and co to cite him for contempt of the court.