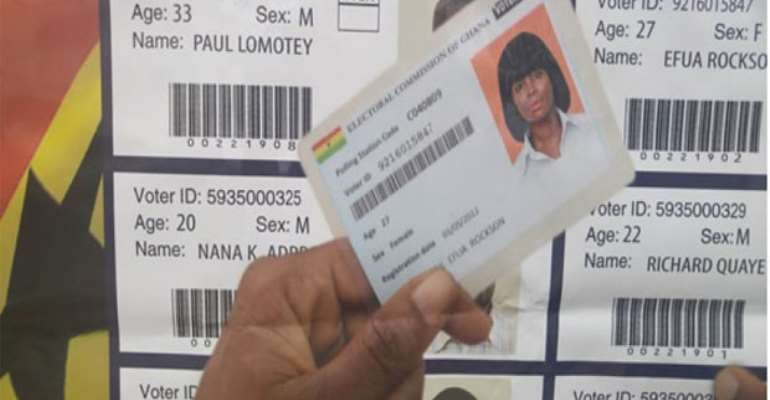 The loudest shouts came from those vehemently opposed to the EC’s decision. The Umbrella-led opposition group, the Inter-Party Resistance Against a New Voters' Register (IPRNA), vowed to do all in its power to ensure the EC’s decision would not see the light of day. In other words, they wouldn’t mind engaging in both legal and illegal activities to make sure their voices were heard and listened to.

Coming from a group that has a history of “shit-bombing” media houses to express their dissatisfaction with news reportage against their party, I had no doubt that they meant every word. With the content of the leaked tape from Elder Kidnapper also ringing in my mind, I knew Jean Mensa’s EC was in for a very bumpy ride. After all, did the tape not reveal that they were prepared and willing to give the EC a bad name so they could have a justification to hang it?

True to their word, they organised two demonstrations in Tamale and Kumasi to protest the move to have a new voters' register. Reports reaching my ‘konkonsaic’ ears indicate that the Tamale protest was particularly rowdy as the protestors burnt car tyres and tried in vain to lure the security personnel on parade to react.

Many of my compatriots are happy the security personnel had resisted the temptation to react, but I’m not. I’m not happy because I had wanted them to have a taste of the meal their government dished out to the “Let My Vote Count” (LMVC) demonstrators, which resulted in the late Justice Adzakumah losing an eye.

Do not get me wrong, Abusuapanin. I’m not vindictive. Most of them saw nothing wrong with what the police did to the LMVC demonstrators. So, I was only hoping that a dose of the same medicine would pump some sense into their thick skulls.

Again, the hypocritical nature of the eagle-headed Umbrella was on full display as its Members of Parliament, who had approved the EC’s budget in Parliament, were also seen demonstrating against the compilation of a new register. The argument that they are the Minority in the House stands on wobbly legs because they had the option of boycotting the proceedings as they usually did on matters they strongly objected to.

It is, however, refreshing to note that the EC is not worried about the demonstrations and the name-calling. The electoral body has gone ahead to announce April 18, 2020 as the date to start the compilation of a new register. As for the EC’s scheduled engagement with the 21-member Eminent Advisory Committee and the political parties on January, 30, 2020, the reason is to inform the stakeholders of its programmes concerning the new voters' register, and solicit views on how best it can be implemented.

When the Elephant said the 1992 presidential poll was a “stolen verdict” and decided to boycott the parliamentary elections, did the EC not move on by conducting the parliamentary polls? So what makes those under the Umbrella think the country will explode because they oppose the compilation of a new register?

Elder Kidnapper and his ilk can organise a thousand demonstrations. They can even decide to boycott the exercise when it begins on April 18. But one thing is clear: There is no turning back on the compilation of a new register.

Abusuapanin, in all the brouhaha over the compilation of a new register, I vividly remember President Ogwanfunu’s “State your case and let EC decide” – a statement he made as president on 8th October 2015 when he reacted to the demand that the voters' register be compiled afresh. He would have been a statesman if he had repeated same today. Sadly, he is but a dead-goat.