In a rare sighting, astronomers observe burst of activity as a massive star forms

By James Okwe Chibueze - The Conversation 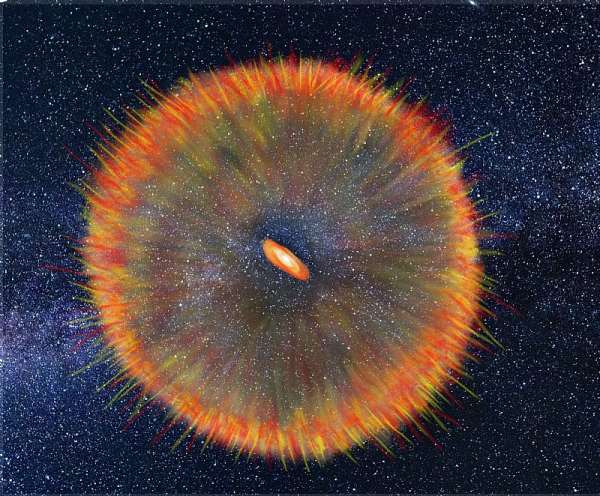 Here on Earth, we pay quite a lot of attention to the sun. It's visible to us, after all, and central to our lives. But it is only one of the billions of stars in our galaxy, the Milky Way. It's also quite small compared to other stars – most are at least eight times more massive.

These massive stars influence the structure, shape and chemical content of a galaxy. And when they have exhausted their hydrogen gas fuel and die, they do so in an explosive event called a supernova. This explosion is sometimes so strong that it triggers the formation of new stars out of materials in the dead star's surroundings.

But there's an important gap in our knowledge: astronomers don't yet fully understand how those original massive stars themselves are initially formed. So far, observations have only yielded some pieces of the puzzle. This is because nearly all the known massive stars in our galaxy are located very far away from our solar system. They also form in close proximity to other massive stars, making it difficult to study the environment where they take shape.

One theory, though, is that a rotating disc of gas and dust funnels materials into the growing star.

Astronomers have recently found that the funnelling of matter into a forming star happens at different rates over time. Sometimes the forming star swallows up a huge amount of matter, resulting in a burst of activities in the massive star. This is called an accretion burst event. It is incredibly rare: only three such events have been observed, out of all the billions of massive stars in the Milky Way.

This is why astronomers are so excited about a recent observation of the phenomenon. I was part of the team that recorded this observation. Now, our team and other astronomers will be able to develop and test theories to explain how high-mass stars gain their mass.

After the first detection of an accretion burst, in 2016, astronomers from around the world agreed in 2017 to coordinate their efforts to observe more. Reported bursts have to be validated and followed up with more observations, and this takes a joint, global effort – which led to the formation of the Maser Monitoring Organisation (M2O).

A maser is the microwave (radio frequency) equivalent of laser. The word stands for “microwave amplification by stimulated emission of radiation”. Masers are observed using radio telescopes and most of them are observed at centimetre wavelength: they are very compact.

A maser flare can be a sign of an extraordinary event such as the formation of a star. Since 2017 radio telescopes in Japan, Poland, Italy, China, Russia, Australia, New Zealand and South Africa (HartRAO, in the country's Gauteng province) have been working together to detect a flare stimulated by a burst in the funnelling of materials into a massive star.

In January 2019, astronomers at Ibaraki University in Japan noticed that one such massive protostar, G358-MM1, showed signs of new activity. The masers associated with the object brightened significantly over a short period of time. The theory is that masers brighten when excited by an accretion burst.

Follow-up observations with the Australian Long Baseline Array revealed something astronomers are witnessing for the first time – a blast of heat-wave coming from the source and travelling through the surroundings of the forming big star. Blasts can last for about two weeks to a few months.

Although the burst activity has died down, the masers are still a lot brighter than they were before the burst. Astronomers are watching with interest to see whether a similar burst will occur again, and at what scale.

This experience shows how valuable it is to have lots of eyes on the sky, from different corners of the globe. Collaboration is astronomy is crucial for new, important discoveries.