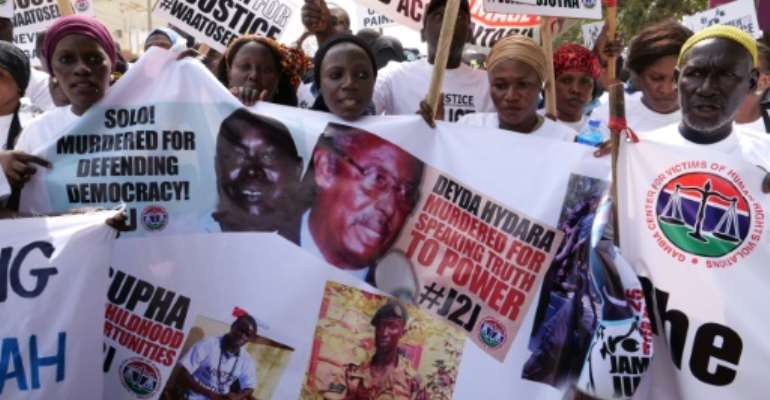 Hundreds of Gambians marched Saturday in the outskirts of the capital Banjul, demanding justice for sweeping rights abuses and murder they suffered under former dictator Yahya Jammeh's 22-year rule.

Jammeh ruled Gambia with an iron fist but fled in January 2017 after losing a presidential election to relative unknown Adama Barrow which he refused to acknowledge before being forced out of power by a popular uprising.

Wearing T-shirts that read #justicemustprevail, the protesters held photographs of people killed or who have gone missing, including AFP correspondent Deyda Hydara, who was gunned down on 16 December 2004 by Jammeh's henchmen.

"We want justice and we want it immediately," they cried and demanding a ban on Jammeh's former ruling Alliance for Patriotic Reorientation and Construction party (APRC).

Nyima Sonko, 42, the widow of Solo Sandeng, a political activist who was arrested and tortured to death after he led a protest march for electoral reform, said: "We are calling on the government to ban the APRC from taking part in active politics."

Since January 2019, some 190 witnesses have appeared before a Truth, Reconciliation and Reparations Commission (TRRC) set up to investigate abuses under Jammeh's rule.

The first year of hearings ended in early December, capping months of testimony about torture, murder, rape and witch hunts in the country of around two million.

Jammeh is in exile in Equatorial Guinea. By Handout (GRTS - Gambia Radio and Television Services/AFP/File)

Last week, thousands marched on the outskirts of Banjul demanding Jammeh's return from exile in Equatorial Guinea, as tensions heighten over Barrow's decision to stay in office for five years -- reversing a previous pledge to step down after three.

Justice Minister Abubacarr Tambadou last week warned that Jammeh would "face immediate arrest and charges of the most serious kind" if he returned, including "crimes against humanity."

They argue he has a right to return under a joint statement from the African Union, the Economic Community of West African States (ECOWAS) and the United Nations, published at the time of his exile.

Maron Baldeh, whose husband lieutenant Basiru Barrow was executed in 1994, said she was at Saturday's protest to call for Jammeh to be prosecuted.

"We are sending message to government to act fast, because... justice delayed is justice denied. Yahya Jammeh should be arrested and put on trial."