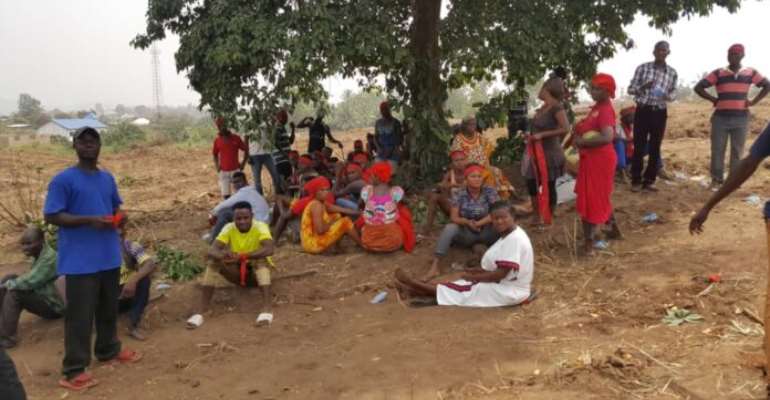 Residents of Obregyima near Panpanso, a farming community in the Nsawam Adoagyir Municipality of the Eastern region are agitating against the destruction of their farmlands by a developer who has come to the community with armed men.

Large hectares of farmlands have been graded destroying crops and fruits planted by the farmers without any negotiation.

The developer identified as Kofi Acquah is alleged to have announced to the community that the land has been leased to him by the Overlord of Akyem Abuakwa Traditional area, Osagyefuo Amoatia Ofori Panin.

Following the announcement, the developer reportedly stormed the community with alleged armed land guards wielding machetes and guns unleashing terror on the farmers scaring them away from their own farms.

Some of the affected farmers said their Orange, Pawpaw, Plaintain, Cassava amongst others farms nearing harvesting have been destroyed

According to the farmers, several complaints lodged at Teacher Mante and Coaltar Police Stations have not seen any swift action by the Police, therefore, threatening to take the laws into their own hands to square off with the developer and his assign land guards.

“The whole problem is that late last year there was a publication van with a message that, Okyenhene has leased the entire Obregyima lands to a developer by name Kofi Acquah so anyone who has an issue should see Kofi Acquah or go to Okyenhene’s palace to negotiate”.

He added “Two weeks ago, that they started carting excavators and bulldozers to this community. As we speak they are destroying our crops but these are all registered family lands”.

“Just this morning, One man by name Nana Owusu Nsiah claiming to work at the office of the President dared us that he has secured a court order so we should not attempt to trespass the land. These are lands inherited by our forefathers so we don’t understand why they are taking the lands away from us. We have secured Judgement in our favour to that effect”.

Settlement Communities near Nsawam particularly along the Nsawam to Suhum stretch of the Accra to Kumasi Highways have witnessed a surge in incidents of land gobbling breeding land guard menace by private developers mostly real estate developers which have led to some deadly clashes.

The developers and even sand winners have been using the name of Okyenhene Osagyefuo Amoatia Ofori Panin as authorization for their activities but the Overlord has maintained that despite being the custodian of the land, he mostly has no hand in happenings in the settlement communities calling on Police to arrest persons who perpetrate such illegalities.