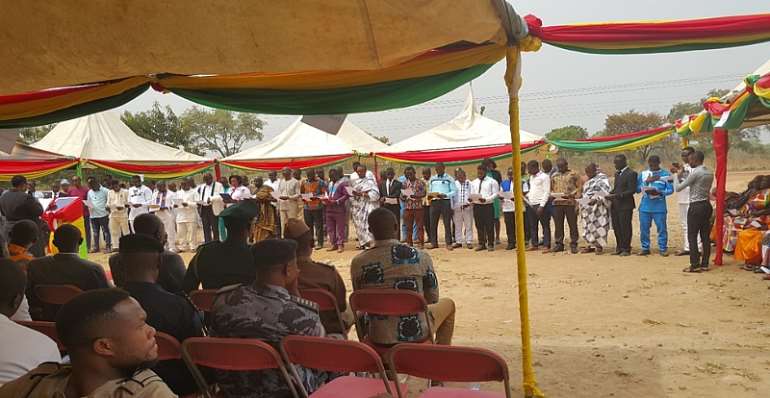 Assembly Members taking the Oath of Office and Secrecy

The Tain District Assembly made up of 52 Members has been inaugurated with the incumbent presiding Member, Mr. Isaac Manu Kwaku emerging for the second time, as Presiding Member.

The Assembly Members which comprises of 36 elected and 16 appointees took the oath of office and secrecy administered by Her Worship, Vivian Yamusah Lariba magistrate of the Wenchi District Court.

Addressing the gathering, the District Chief Executive, Madam Charity Akua Foriwaa Dwommoh called on the Assembly Members to discharge their duties effectively and efficiently to help facilitate the needed development in the District.

The DCE disclosed that the District placed 46th in the performance of MMDAs Assessed for the year 2018 and her target is to be in the first ten for the 2019 assessment, a task which requires all hands on deck, she said.

She entreated the citizenry and other stakeholders in the District to see the Assembly as their own and support it to discharge its mandate which will be of benefit to all.

She also indicated that the government is on course to deliver on its mandate and the District is also getting its share of the development agenda of the government.

She assured the Assembly Members and other stakeholders that her doors are always open to them to help facilitate the development of the District.

Deputy Minister for Energy and Petroleum Mr. Joseph Cudjoe who delivered the presidential address said Assemblies are critical part of government and have a role to play in ensuring that the government delivers on its promises to the citizenry and charged the Assembly Members to collaborate with the DCE to advance the implementation of government programmes in the Co-ordinated Programme of Economic and Social Development Policies 2017-2014.

The Deputy Minister also urged the Assembly Members to partner the Assembly to device ways to increase its revenue generation to rake in more internally generated funds for the execution of development projects and the operations of the Assembly.

He also charges the Assembly to use its bye-laws to enforce compliance in sanitation management and environmental health standards and rules to ensure a clean and healthy environment.