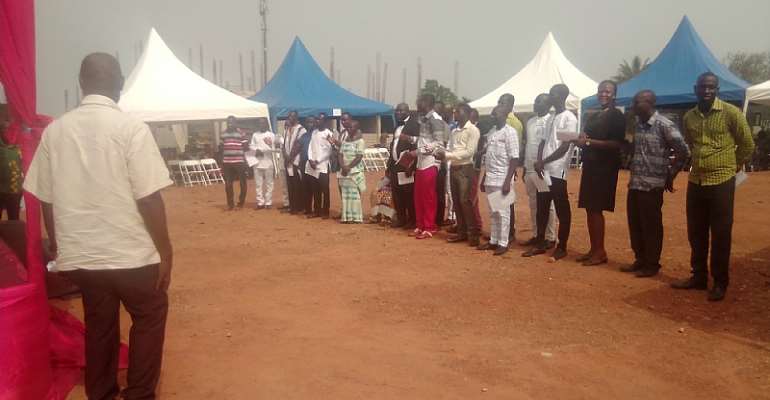 They both went unopposed with all the Assembly Members voting Yes to confirm them in elections conducted by Gomoa Central and Agona East District Directors of the Electoral Commission.

The inaugural address were delivered by the Central Regional Minister, Hon. Kwamina Duncan and Nana Owusu Nsiah, a Member of the Council of State at Agona Nsaba and Gomoa Afransi respectively

" As I inaugurate these Assemblies, to commence its Four-year tenure, be mindful of the fact that the Assemblies are a critical part of Government, and have a role to play in ensuring that the government delivers on its promises to Ghanaians together with your Metropolitan, Municipal and District Chief Executives

Government has launched, and is pursuing a number of policies and programmes aimed at improving the welfare and well-being of Ghanaians including Free SHS, ' One District One Factory ', programme for Planting for Food and Jobs, Planting For Export and Rural Development, One village One Dam amongst many others"

President Akufo Addo further stated that Ministry of Local Government and Rural Development has formulated a Rural Development Policy which provides a mechanism for implementation of Co-ordinated interventions on agriculture, social services, industrialisation, financial inclusion and skills development to ensure transformative change of the lives of rural people across the country.

Let me remind you again that you are being inaugurated at a time when efforts are being made by Government through the Ministry of Local Government and Rural Development to enhance internal generated funds (IGF) of MMDAs, particularly in the area of property rates.

To this end, I invite you to take advantage of automation and other innovative systems developed by the Ministry to improve your IGF.

Slums being developed in marshy areas, and houses built on waterways have become a phenomenon with serious implications to national development and public safety.

" As you are sworn in today, work with your Assemblies to ensure compliance with the building rules and regulations on zoning and Development of lands and ensure that Lands are developed according to approved plans and designated land use to avoid flooding and its accompanying loss of lives and property

Section 12 (3) (f) of the Local Government Act, 2016 ( Act 936) specifies that Assemblies shall be responsible for the development, improvement and management of human settlement and the environment in the District

The Act also empowers the Assemblies to make Bye-Laws to address issues waste management, licensing and monitoring environmental service providers, solid waste collection and management, and any other matters that demand Local regulations in order to achieve and maintain a clean and healthy environment"

His Excellency Nana Addo Dankwa Akufo Addo further stated that the major function of the Assembly was to explore avenue for the creation of employment for the people, particularly the Youth.

" Thankfully, many of the Districts have a comparative advantage in achieving this in the Agricultural sector.

As an Assembly, work towards a diversified and commercially oriented Agricultural sector with strong linkages to Industry and markets to generate employment and address rural poverty in Ghana."

The Agona East District Chief Executive, Hon. Dennis Armah Frimpong while congratulating the 30- Member Assembly urged them to contribute their quota towards the development of the District.

" A clean environment, good roads, schools, clinics and potable drinking water are all urgently needed by our Communities

With the caliber of Assembly Members, am convinced that we shall deliver to meet the aspirations and needs of our people as an Assembly"

" I will entreat all Assembly Members to maintain close contacts with their Electoral Areas, consult people on issues discussed at the Assembly and also collate their views and opinions for presentation to the Assembly

while Her Worship Justice Beatrice Amedzi, Gomoa District Court Judge at Gomoa Dawurampong sworn in the 22 Members of the Gomoa Central District Assembly at Gomoa Afransi. 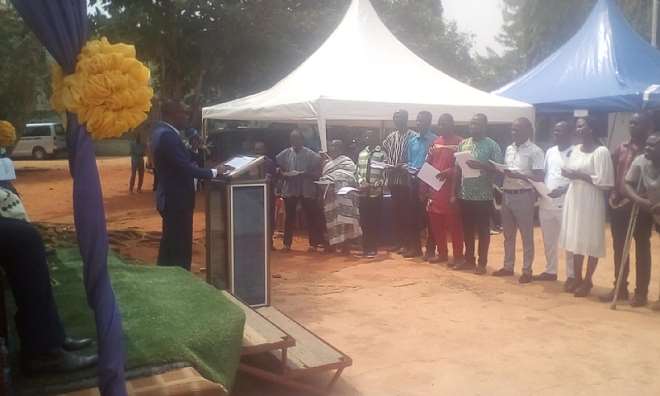