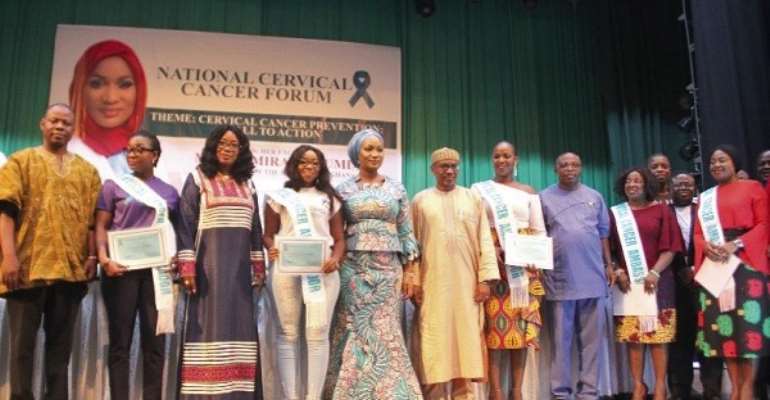 Although it is preventable and treatable when detected early, cervical cancer is killing over 2,000 women every year in the country, health professionals have said.

At a national forum in Accra yesterday to raise awareness of the disease, about 10 medical doctors who spoke attributed the high mortality rate to reasons such as late screening and late detection.

They, therefore, called for voluntary screening and early treatment to help save lives.

The forum, held on the theme: “Cervical cancer prevention, a call to action,”was also used to sustain the momentum of public education and screening beyond January, this year, which had been set aside as cervical cancer awareness month.

It was an initiative of the Society of Gynaecologists and Obstetricians of Ghana (SOGOG) in partnership with the Samira Empowerment Foundation, the Korle Bu Teaching Hospital and other stakeholders.

In a presentation, an oncologist at the Korle Bu Teaching Hospital, Dr Hawa Malechi, indicated that while people often wanted to see symptoms of diseases before seeking medical attention, cervical cancer posed no symptoms at the treatable stages.

"Once symptoms for cervical cancer show, then it has reached a very advanced stage that can only be managed and not treated and at that point, chances of survival is less than 50 per cent," she said.

Throwing more light on the condition, she said cervical cancer developed in a woman's cervix (the entrance to the womb from the vagina) and mainly affected sexually active women aged between 30 and 60.

Human Papilloma Virus
Dr Malechi, who is the first woman oncologist from Northern Ghana, said almost all cases of cervical cancer were caused by the Human Papilloma Virus (HPV), describing it as a very common virus that could be passed on through any type of sexual contact with a man or a woman.

She said men were often the carriers and added that there were more than 100 types of HPV, many of which were harmless, but some types could cause abnormal changes to the cells of the cervix, which could eventually lead to cervical cancer.

The oncologist stated that using condoms during sex offered some protection against HPV, but it could not always prevent infection because the virus also spread through skin-to-skin contact of the wider genital area.

She reiterated that the condition often had no symptoms in its early stages and named symptoms of its advanced stages to include abnormal vaginal bleeding, which could occur during or after sex, in between periods, or new bleeding after menopause.

“Abnormal bleeding does not mean you have cervical cancer, but you should seek medical attention as soon as possible to get it checked,” she urged.

She said the vaccination should also prioritise young girls and boys before they became sexually exposed.

She mentioned other risk factors to include women giving birth to many, smoking and women with STIs.

Eradication
The wife of the Vice-President, Mrs Samira Bawumia, called on women to get tested for cervical cancer immediately to help national efforts at eradicating the public health burden.

She said it was unacceptable for any woman to die from cervical cancer because it was preventable and treatable.

Mrs Bawumia said cervical cancer, which is a public health issue, required a national response and urged stakeholders in the public health sector to help increase awareness, stressing that “this is our call to action and early detection is the key.”

She also called for increased public awareness of the condition to help eradicate it.

Discussions
The Deputy Minister of Health, Mr Alex Abban, said the ministry had held series of discussions with service providers of the National Health Insurance Scheme (NHIS) and was in the process of taking up the cost of providing free cervical cancer screening for women across the country.

He urged all public health practitioners to take the campaign beyond January and make it a year-long affair.