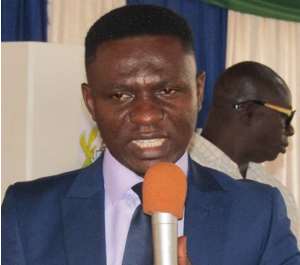 The Asene Manso Akroso District has elected Mr. Enock Ofori Aiden, the incumbent Presiding Member (PM) as the new PM for the second session of the Assembly at Akyem Manso in the Eastern Region.

He was sworn into office including some other 21 Assembly Members and 10 government appointees by the Akim Oda Magistrate Court Judge, His Worship Akwasi Appiatse Abaidoo.

At the election to elect the Presiding Member of the Assembly, Mr. Enock Ofori Aiden stood unopposed and polled 22 votes out of the 33 votes to be declared the winner by Miss Divine Abena Owusu, the district electoral officer.

In short but impressive acceptance speech, Mr. Ofori Aiden thanked honorable members for the confidence reposed in him and pledged to work with all Assembly Members to champion the development for the district.

The District Chief Executive (DCE) for Asene Manso Akroso, Mr. Alex Incoom in an address charged the Assembly members-elect and government appointees to maintain close contact with their electorates and collate their views regularly to the General Assembly so as to deepen Ghana’s decentralization system of governance.

He further urged them and Unit Committee Members to work hand in hand to ensure they mobilize revenue for the implementation and execution of the Assembly’s projects.

Mr. Godfred Yeboah Dame, the Deputy Minister for Justice and Attorney General who inaugurated the session on behalf of His Excellency Nana Addo Dankwa Akufo-Addo, the President of the Republic noted that Assemblies are a critical part of the government and for that matter needs to be managed effectively to improve the lives of the citizenry.

He urged the management of the Assembly to put in place pragmatic measures to implement government’s co-ordinated programs initiated from 2017-2024 in order to create jobs for the teeming unemployed youth to improve their living standards.

Mr. Yeboah Dame encouraged the Assembly to use Town Hall Meetings and community engagement to create platforms for duty bearers to account for their stewardships and collate views from their electorates to strengthen the participation of the local governance system to ensure the needs of the residents.

Mr. Yeboah Dame advised the Assembly members and government appointees to corporate and work hard to mobilize Internally Generated Funds (IGF) for the Assembly and also educate the citizens on good sanitation practices to improve the sanitary condition in the district and the country as a whole.

Obrempong Sintim Poku III, the Omanhene of Akyem Manso and Benkumhene of Akyem Kotoku Traditional Council who chaired the inaugural programme urged the honorable members to bury their differences and come together as one people with one common destiny to discharge their core mandates effectively to make the district acquires more developmental projects.