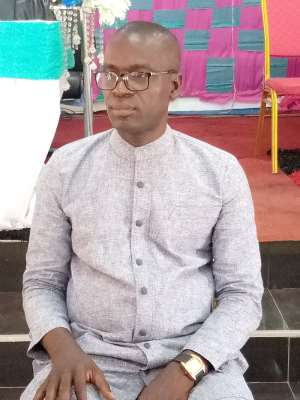 In his victory speech to continue his good works as Presiding Member, Hon. Adjei said the day is a great day for him as it marks the second session of the Obuasi East District Assembly since it was created in 2018.

He seized the opportunity to thank all Assembly Members for their tremendous support resulting in his victory as the Presiding Member for the Assembly and promised to continue to work assiduously as he has always done to ensure the development of the district.

Hon. Jeff Adjei Oware appealed to the Assembly Members to help in mobilizing funds through educating their community members on the need to pay their taxes for the Assembly to boost its Internally Generated Fund (IGF) since the Assembly cannot depend on the funds from central Government alone to develop the District.

He then called on all the Assembly Members to come together and work for the development of Obuasi East and Ghana as a country. He polled 23 votes out of 28 total votes cast representing 76.8%.

Hon. Jeff Adjei is a business man and hails from Assin Akonfudi in the Assin North District in the Central Region of Ghana, he is married with kids.