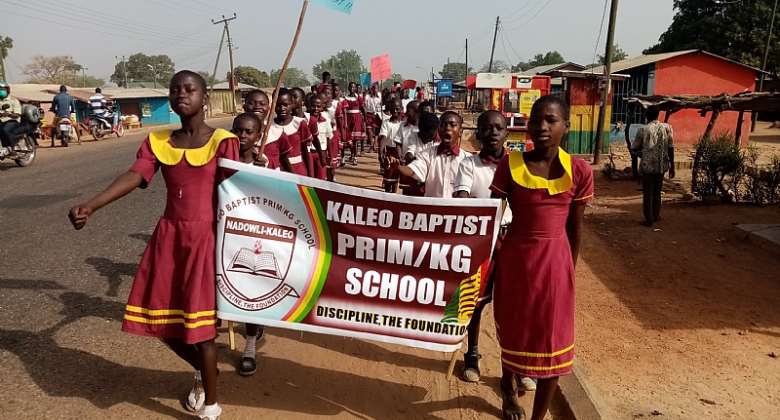 Through hard work and determination by the founders, the school has developed into one of the leading basic schools in terms of sports, discipline, and academia in Kaleo and the Nadowli-Kaleo District of the Upper West Region.

Presently, the school has a student population of three hundred and ninety-three (393), thus, from Kindergarten(KG) up to JHS One (1) with twenty(20) teaching and One non-teaching staff.

According to the Headmistress of the Baptist Primary School, Rebecca Saan, the birth of the school was masterminded by a VSO from the United Kingdom, Andy Hempson who was attached as a teacher at the Kaleo Senior High/Technical School.

He was a member of the Baptist Church and worshipped with the Kaleo congregation while in Ghana. He later made friends with the head pastor and other members of the church which led to the establishment of the school.

The head pastor of the Kaleo Baptist Church, Solomon Bagonluri said "ten years of providing quality education" to the poor and vulnerable for whose sake, the school was established was no mean achievement for the Church.

Mr. Bagonluri urged teachers of the school to pay much attention to instilling some moral values in the pupils as a way of grooming them to become responsible future leaders who would not tolerate corruption in their social and public life.

He further mentioned that he expects pupils who passed through the school to have the skill of creativity to be able to solve problems in everyday life and be self-sufficient and not dependent on the government for employment.

Mr. Bagonluri commended the pupils for comporting and disciplining themselves anytime they attend any public gathering and also said he is impressed by the fact that the pupils are very fluent in the 'Queens language' and commended the teachers for doing a yew man's job.

For his part, Albert Mwaabu who is the headmaster of the Baptist Junior High School said he is very impressed with the caliber of pupils in the school.

According to him, the brilliance of the J.H.S One pupils is unmatched and that teachers who do not prepare well before honoring their lessons may get disgraced by the pupils through their intellectual discourse in class.

Mr. Mwaabu commended the Nadowli District Education Directorate for assisting the school with adequate staff but appealed to them to provide them with some textbooks to augment the limited number of teaching and learning materials. He expressed appreciation to the Parent-Teacher Association and the School Management Committee of their enormous support and cooperation.

School Prefect of the Kaleo Baptist Junior High School, Israel Bagonluri who spoke on behalf of his colleague students said: "they are very grateful to the Almighty God for seeing them through all this period of ten years." He encouraged his colleagues to continue to take their studies seriously since that is the only way to achieve what they aspire to become in the nearest future.

The Kaleo Baptist is ten years old and has embarked on a root-match to launch its anniversary celebration in Kaleo. The theme for the celebration is "Baptist education, quality education, the role of the teacher".