AfAW And Witch Persecution In Africa 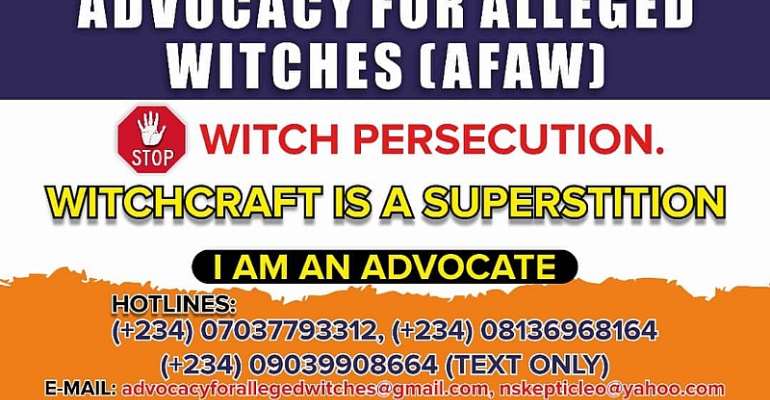 Advocacy for Alleged Witches (AfAW) is an initiative to build a critical mass of support for those who are accused of witchcraft. Witchcraft allegations lead to a break down of social ties and solidarity including the isolation and ostracization of the accused.

AfAW aims to forge an effective alliance to tackle abuses that are linked to witchcraft accusation and witch persecution. For far too long, those who are accused of witchcraft are treated in most horrific ways. Alleged witches are attacked, killed and brutalized with impunity. They are banished and subjected to trial by ordeal. In most cases, witchcraft accusers and witch hunters determine the fate of the accused.

Recently in Nigeria, a parent set his two children ablaze after accusing them of witchcraft. And in Malawi, a mob stoned a 40-year-old woman to death for allegedly killing a relative through magical means. These abuses take place due to lack of effective mechanisms to support persons who are suspected of witchcraft. Abuses linked to witchcraft accusation and persecution happen due to a deficit in advocacy for alleged witches in the region. AfAW has been established to fulfill this need, and ensure that alleged witches get the support they need.

The main objective of AfAW is to realize a critical mass of advocates in villages, communities, counties, and countries in Africa. If a significant number of advocates exist across the region, witchcraft allegations will be nipped in the bud. Suspicions of occult harm will not translate into the campaign of violence, abuse, and bloodshed as is the case in many places.

AfAW plans to intervene to save, support and defend accused persons. The support for accused persons is predicated on the notion that alleged witches are innocent, and witchcraft is a form of superstition. Support for the accused is a reactive approach to ensure that survivors are out of danger and in a position to restart their lives. Assistance for alleged witches includes rehabilitation, relocation and reintegration. In cases where alleged witches have been attacked and wounded, AfAW will support their medical care and treatment. It will facilitate relocation if the resources are available and reconciliation and reintegration with families.

However, support for the accused is not enough to realize a witch-hunting free Africa because alleged witches are victims. They are not the victimizers. Witchcraft accusers and witch hunters are the victimizers and they also need support. AfAW exists to cater for their needs.

To this end, AfAW will work to educate and enlighten actual and potential witchcraft accusers including witchcraft believers. Those who believe in witchcraft, that other humans could harm them through occult means, are likely to accuse or maltreat the accused. They are likely to abuse or turn a blind eye on abuses. People indulge in witchcraft accusations due to fears, ignorance and misunderstanding of nature and how nature works. Witchcraft accusers need support in dispelling misplaced fears and apprehensions. They need to be assisted in freeing themselves from occult anxieties and mistaken ideas about the causes of misfortune.

In the coming years, AfAW will champion this program of social reorientation and conscientization, cultural awakening, renewal and rebirth.