Ghanaians Do Not Love Democracy 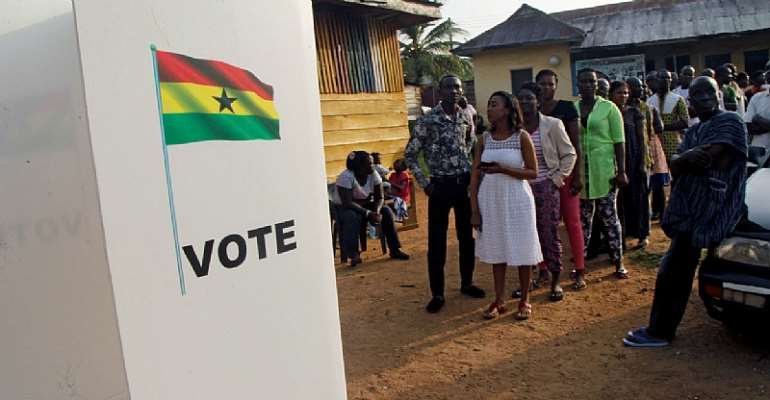 It has already been scuttled, so there is absolutely no use or need in flogging the proverbial dead horse over the December 17, 2019 Referendum on the decidedly beneficial party-oriented democratization of the process by which our local executives and community leaders are appointed or selected. As usual, as regressively prevailed in the Nkrumah era of Ghana’s First Republic, so-called, our self-serving invested and politically parochial traditional rulers staunchly and fiercely resisted this most progressive transformative process. It was the most seismic of resistances or the stiffest of its kind since the post-1966 era. But what was even more tragic, if also predictably comical, was the rather gapingly lame argument put up by Togbe Afede, XIV, the flamboyant and cantankerous and politically mischievous President of the National House of Chiefs, that “effective decentralization would negatively be affected by the control of local parties[,] given that the Constitution was purposely designed to protect local governance” (“December 17 Referendum: Stop ‘No’ Vote Campaign – Franklin Cudjoe” Ghanaweb.com 11/16/19).

What Togbe Afede and his cronies and staunch partisans meant by the National Democratic Congress-crafted and stage-managed 1992 Constitution being “purposely designed to protect local level governance,” is an obvious code phrase for the jaded institution of chieftaincy, which is presently allocated some 30-percent of nonelected representatives/representation in our Local District Assemblies and at the Community of “Unit” level. Actually, what the current process of nonelective representation of our chieftains in our local assemblies does, of course, is to effectively bastardize by mischievously and egotistically and illegitimately regressing the onward process and the progress and the salutary quality of Ghanaian democracy. Indeed, it goes without saying that a system that protects the imperialistic domination of our local political culture by these temporally and organically anachronistic chiefs cannot in any way or by any definition be described as the “effective decentralization” of our local government and/or governance system.

Then also, any studious observer or expert of Ghanaian politics is well aware of the fact that Togbe Afede is the most pathologically partisan of any major Ghanaian traditional ruler. His party affiliation is absolutely no secret, being that the Yale Business School-trained entrepreneur and the alleged owner or majority shareholder of Premier League Soccer Team, Accra Hearts of Oak, was also the Chairman of several transitional teams and sub-teams during the period between the official exit of the John Agyekum-Kufuor-led government of the New Patriotic Party (NPP) and the assumption of the democratic reins of governance by the John Evans Atta-Mills-led government of the National Democratic Congress, that is, between December 7, 2008 and January 7, 2009. In other words, Togbe Afede, who is also a former President of the Volta Regional House of Chiefs, is the most virulently partisan politician falsely masquerading as a nonpartisan chieftain with reckless abandon.

Now, I wouldn’t want to get into any details here, but it clearly appears that it was the abjectly poor public education about the imperative need to healthily divorce the functionally ossified institution of chieftaincy from a fast-growing modern democratic Ghanaian political culture that enabled the December 17, 2019 valiant and visionary attempt to effectively democratize our local governance system that witnessed the unfortunate evisceration of the same. This column, however, is being written at least one month late to back up the last-minute attempt by the President of the IMANI-Africa think-tank, Mr. Franklin Cudjoe, to valiantly, albeit belatedly and ineffectually, to challenge the self-interested individuals and deliberate institutional saboteurs of the Referendum, among them, the National House of Chiefs and the country’s main opposition National Democratic Congress, whose leaders are on incontrovertible record as having initially agreed to the effective democratization and decentralization of our local governance system, only to make an about face less than a month to the aborted December 17 Referendum.

In the wake of the scrapping of the December 17 Referendum, former President John Dramani Mahama was reported by the media to have opined that the Referendum against which he had vigorously campaigned ought to have been allowed to proceed. On the other hand, the Akufo-Addo Administration had apparently called the entire exercise off because it was erroneously believed that, somehow, the outcome of the Referendum would be a logical portent of the likely outcome of the December 2020 general election. In retrospect, even as I suggested in the wake of the scrapping of the aforementioned Referendum, even if President Addo Dankwa Akufo-Addo had lost his gamble, he would, nevertheless, have gone into the record books of the Immortals as having at least taken the boldest initiative yet to thoroughly democratize Ghana’s long-outdated local governance system; and this foresighted policy initiative, in of itself, would almost have guaranteed that his margin of victory, come Election 2020, would be even more seismically impressive than it had been in 2016.

Where I unreservedly concur with Mr. Cudjoe, of the IMANI-Africa think-tank, is that legitimately or legally paving the way for the presently appointed Metropolitan, Municipal and District Chiefs Executive to be directly elected by voters would have more effectively ensured that these very powerful local administrative portfolios would be primarily won on merit, rather than being arbitrarily or politically parceled out on the basis of the sheer generosity of local party bosses and their favorite party boys and girls. It would also have significantly reduced the inordinate political horse-trading propensity towards official corruption and the rampant and riotous rejection of quite a remarkable number of local executive appointees perceived to be “outsiders” or bad political team players, as has been witnessed all over the country, on more than several occasions, since the beginning of Ghana’s Fourth Republic, in January 1993 or thereabouts.

IMANI-Africa’s Mr. Cudjoe’s most significant contribution yet to the aborted December 17, 2019 Referendum on the effective democratization of our local governance system – President Akufo-Addo prefers the more politically and philosophically poignant terminology of the “deepening of local democratic culture” – is his observation that electing our local chief executives and assembly or legislative representatives along political party lines, would definitely enable the smaller political parties to healthily break the “NPP-NDC duopoly” or hermetically exclusive grips on Ghanaian politics and the thoroughgoing propensity towards the effective institutionalization of cold-calculated corruption.

The author has 4924 publications published on Modern Ghana.