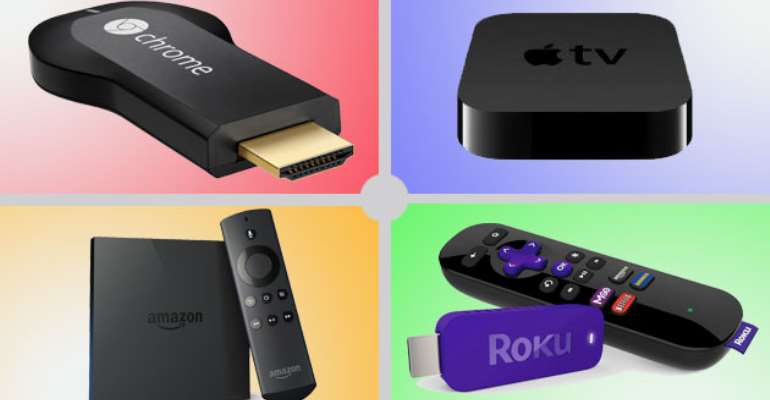 THE BEGINNING
TV providers are declining in subscription due to popularity of streaming media players such as Amazon’s Fire TV and Apple TV. These popular devices are referred to as Android boxes. Cloud gaming company, OnLive launched the MicroConsole in 2010. The MicroConsole was a television adapter. The adapter functioned with a wireless controller that allowed the user to operate OnLive’s computer game streaming service to TVs. The plan for MicroConsole was to offer the consumer a cost-efficient alternative for hardware upgrades with high-end gaming.

APPLE GETS IT RIGHT
Apple made early attempts to enter the television industry with its brand, Apple TV back in 2006. They foresaw the upcoming zeitgeist but had not yet found the right medium to make an entry. Apple TV’s first generation used a software interface called Front Row. It was an application that allowed the user to navigate music, photos, videos and podcasts with iTunes and iPhoto. Front Row became obsolete as a software as iTunes security standards had weakened with the times. Apple found success with its second-generation model of Apple TV now powered by iOS in 2010.

AMAZON MASTERS THE MARKET
Amazon released their own digital media device, Amazon Fire TV in 2014. The console is a multipurpose platform that streams audio and video content from the internet to TV sets. Amazon Fire TV featured gaming service with mobile connection and use of controllers. Through incredible marketing, Amazon’s android box succeeded where where its predecessor - OnLive’s MicroConsole could not.

LOW FEES AND ENDLESS CHOICES
Traditional cable and telecom companies were observant of industry changes but reluctant to buy in at the time. A one time fee between 100 to 200 dollars is the cost for streaming devices. All you need is a connection to the internet through a modem or router. You can pay subscription fees for only the content you want with apps such as Netflix and Disney Plus. Most apps are free of charge. If you know where to look, the possibilities for free content are endless.

CORD CUTTING THREATENS TV PROVIDERS
The major Pay-TV providers lost approximately 2.87 million subscribers in 2018, according to data compiled from Leitchman Research Group . Satellite accounted for a loss of 2.3 million while the top six cable companies reported a loss of 910,000 subscribers. AT&TU -Verse, Sling TV, and DirectTV NOW cushioned the blow with a net add of 641,000. Major Pay-TV continued to lose traction with a report of 2.88 lost subscribers through the first half of 2019. TV providers experienced an additional loss of 1.74 million in the 3rd quarter.

THE MORE THINGS CHANGE, THE MORE THEY STAY THE SAME

Rogers Communications began a rollout of its own IPTV streaming television service, Ignite TV in June 2018. To use the device, users purchase a television subscription along with internet service provided by Rogers. Ignite TV featured an initial starter package for with 500 Mbps internet that was set at $164.99 per month. Rogers has since cut the fee down to $134.99 per month. Considering the direction of the entertainment industry this is a risky price for 36 channels. The user may end up paying additional fees for apps regardless. Maybe Rogers could offer a much cheaper streaming package with internet set at 50 Mbps. All in all, cheaper plans were the selling point of leaving cable behind in the first place.