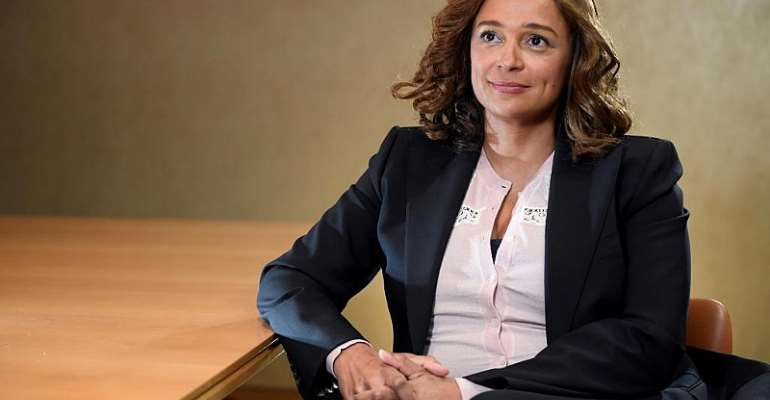 Angola's billionaire former first daughter says she's ready to fight graft claims and clear her name after being charged with embezzling millions of dollars from a state oil company and other economic crimes that she called politically motivated.

"The allegations which have been made against me over the last few days are extremely misleading and untrue," she said in a statement issued through a public relations firm in London.

Dos Santos said she was "ready to fight through the international courts to defend my good name."

The revelations are not entirely new. For years, Angolan journalist and activist Rafael Marques exposed the links between Dos Santos' enormous wealth and her privileged access to Angolan state funds.

"The Luanda Leaks clearly demonstrate how Isabel dos Santos and her husband Sindika Dokolo were able to exploit the secrecy of global finance and the phantom culture of shell companies," she said.

The trove of documents obtained by the International Consortium of Investigative Journalists, including RFI, details how Africa's richest woman built a fortune through questionable business deals, more than 400 companies in 41 countries, including 94 in tax havens.

Global finance under spotlight
"This culture is not illegal per se," continues Maussion, "According to Dos Santos, other rich families do the same. Nonetheless, the way it <[a target="_blank" href="http://dictionary.cambridge.org/fr/dictionnaire/anglais/shell-company">shell companies] is used does pose serious ethical questions," she told RFI.

The mounting scandal has shone a spotlight on the complicity of global consulting companies in allowing Isabel dos Santos to build an empire on ill-gotten gains all the while ignoring red flags.

"This case has shown us that there is a real issue with the supervision of financial institutions," comments Maira Martini, an expert on corrupt cash flows at Transparency International in Berlin, calling for better enforcement of compliance checks.

Martini also reproaches secrecy jurisdictions like Dubai and Malta that enable tax havens to thrive, urging "stricter controls of companies" so we know "why they exist, what they do and who owns it and where the money is coming from," she told RFI.

For now, the daughter of the former Angolan president has denied wrongdoing and continues to paint herself as a self-made business woman, whose acumen brought money and jobs to her native Angola.

Facing justice
This notwithstanding, the wealth of the accusations against her--more than 700,000 leaked emails, charts, contracts, audits and accounts--were enough for Angolan prosecutors to formally charge her on Wednesday with “money laundering, influence peddling, harmful management” and “forgery of documents, among other economic crimes”, committed when she ran the state oil company Sonangol.

The same day she was charged, a Portuguese banker identified in the "Luanda Leaks" as Dos Santos' account manager, was found dead at his home in Lisbon in an apparent suicide.

Just hours earlier, Dos Santos had stepped down as the main shareholder at EuroBic where the suspect worked.

Another suspect meanwhile, the head of one of Angola's largest banks, also quit his job after it emerged he acted as Dos Santos' "personal financial adviser."

"Five years ago, if anyone had said that the Dos Santos family could risk losing its empire or even being challenged, it would have been unthinkable," comments Martini of Transparency International.

"I think people need to put pressure on governments not just in Angola but other countries where financial facilitators have enabled this sort of practice to ensure there is no impunity," she said.

Noose tightening
The noose has been tightening slowly around the Dos Santos family since President Joao Lourenço came to power in August 2017 with a vow to tackle corruption.

He sacked the former first daughter from the state oil giant Sonangol within two months of taking office after her successor Carlos Saturnino raised the alarm about "irregular money transfers" and other suspect procedures.

"This is a very concentrated, orchestrated and well-coordinated political attack, ahead of (ruling party) elections in Angola next year," the 46-year-old Dos Santos said.

For observers, it's a painfully sad story for the woman dubbed Angola's "Princess."

"It's extremely sad, am I surprised? Possibly not," comments political analyst Joseph Ochieno.

"Yes, I was one of those who suspected that her money was almost certainly the result of her advantaged upbringing, but I wouldn't think that it went to this extent."

For Ochieno, the downfall of Dos Santos is all the more compounding given Angola's long and bloody civil war.

Civil war
"In fact, you can call it the then African Cold War. And the war in Angola was the decisive war that saw the end to apartheid in South Africa. Everybody who understood the context of this conflict must have had hope that Angola needed to have the opportunity to start afresh," he told RFI.

Instead, two decades of unscrupulous deals made Isabel dos Santos Africa's wealthiest woman and left oil- and diamond-rich Angola one of the poorest countries on Earth, according to the Luanda Leaks.

Transparency International says Luanda is likely to request Dos Santos' extradition to face trial, but on Thursday her whereabouts were still unknown.