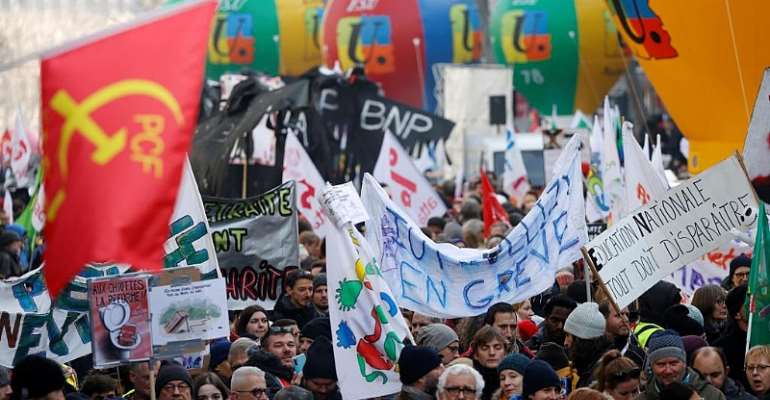 Trade union organisors say over 350,000 protestors demonstrated in Paris today against the government's proposed pension reforms, after what one union called a "pause" in its strike action this week.

Today's action comes as the details of the law are finally put before cabinet ministers for approval. The draft then heads to parliament where it will probably be voted into law before the summer.

It is now 51 days since the strike action began against a reform which was one of President Macron's key election pledges.

Winners and losers
The reform would end a system which currently has 42 separate pension regimes that offer early retirement and other entitlements to public sector workers as well as several other groups.

Supporters of the reforms welcome changes which will mean some workers in relatively comfortable jobs will no longer benefit from a system designed decades ago when their working conditions were difficult.

The government maintains that the pension reform will be fairer to women and some low-income workers who are not on the public pay-roll, such as agricultural workers.

However, critics say the new points-based system will effectively force millions of people to work longer.

In the face of opposition, the government has already temporarily dropped a plan to raise the retirement age for a full pension from 62 to 64, leading some supporters to warn that future generations will end up paying

Shift focus to power cuts and ports?
Some unions agreed a “pause” from the strike this week and transport services in the capital were almost back to normal.

The largest union, the CFDT, has suspended action ahead of talks with the government but other unions insist the reform plan be abandoned completely.

The FO and CGT unions, who wield much power in the public sector, have called for a new day of walkouts on January 29th.

They say the strike is not over and they are shifting their focus to power cuts, port blockades and other protests.

On Friday, most TGV trains were running normally and a majority of regional trains are also running.