Did Akufo-Addo Need An Elephant-Sized Delegation To London? 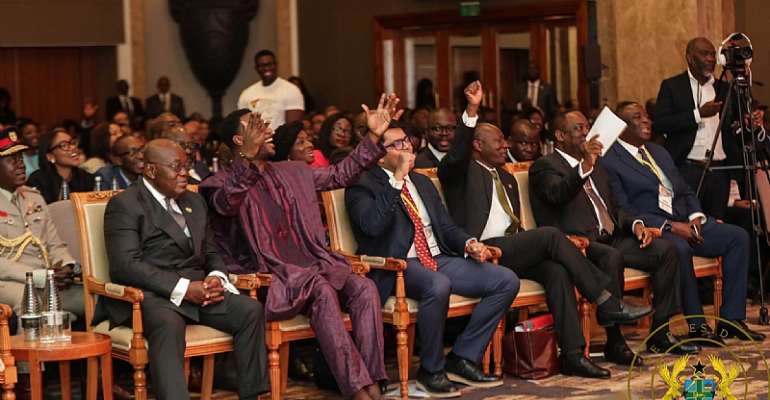 Akufo Addo has been in London to attend the UK-Africa Summit 2020 with 102 appointees and party members.

The United Kingdom voted in a referendum to leave the European Union (EU) and is looking for new economic partnerships outside of Europe. It is therefore not surprising that natural resource rich African countries including Ghana are the focus of the United Kingdom government for investment and business opportunities.

The British Prime Minister, Boris Johnson announced a £6.5 billion trade package for the African continent at the summit.

Unfortunately, as a country that touts itself as the gateway to Africa with so much orchestrated noise and deliberate lies told about Akufo Addo’s failed year of return project, the country only got a paltry £326 million out of the entire package.

Ghana could have been the first or among the first choice investment destinations if the rate of real economic progress of our economy by the previous government had been sustained by president Akufo Addo.

According to a 2019 report by the Economic Commission for Africa, Ghana is among countries in Africa at high risk of debt distress due to heavy borrowing. The IMF and World Bank in their 2019 Debt Sustainability Analysis also classified Ghana as one of seven countries in Africa under high risk of debt distress. This has the negative impacts of increased government spending and interest payments by the state.

These gloomy economic reports do not make Ghana a competitive investment destination on the African continent in spite of the usual positive rhetorics from the Akufo Addo government.

Ghana can only benefit from international investments and business partnerships if Akufo Addo stops talking the economy, take deliberate and sustained actions, implement policies that will create the enabling environment for business to thrive.

Unfortunately, Akufo Addo is running an oversized, non-performing government. Unbridled corruption, profligacy and insecurity in Ghana has been so bad under this government that ambassadors of others countries have had cause to depart from the usual diplomatic protocol to admonish the government on the need to stop talking the fight against corruption, show genuine and real commitment and allow state institutions such as CHRAJ, EOCO, the special prosecutor, among other anti-corruption institutions to work independently. The US ambassador to Ghana Stephanie Sullivan in 2019 asked the Akufo Addo government to take the fight against corruption seriously or risk loosing investments to Ghana. This does not bode well for Ghana’s international business relations.

Countless number of corruption allegations against government appointees have either been improperly investigated, cleared by the president or swept under the carpet.

Contract killings and a general sense of insecurity have engulfed the country. Many businesses have either collapsed due to the current poisoned business environment or are deliberately pulled down by the family and friends government ran by Akufo Addo.

Some of the foreign businesses that have existed in Ghana and operated profitably over the years before Akufo Addo became president have indicated their intention to move their investments elsewhere in Africa.

Akufo Addo does not need to travel with an ‘elephant size’ group of ministers that cost the state millions of Ghana cedis. The money spent on these excessive numbers could have been well spent on fixing our roads, abandoned hospitals, hospitals with no beds, cancel the double track and restore the quality education he inherited. By so doing, government will not need to spoon-feed innocent SHS students with question papers to create a positive impression of a poorly implemented Free SHS policy.

A recent UN Human Capital Index report indicated that 44% of Ghana’s youth will become waste, unable to contribute meaningfully to national development due to the poor quality of education.

The money wasted could have also been used to construct proper and meaningful dams to support rural agriculture as against the dugouts which are drying up, leaving our rural poor farmers hung out to dry.

It is not the first time Akufo Addo has traveled with such a huge delegation to an international conference. It is still very fresh in the minds of Ghanaians how he traveled to the UN General Assembly in 2019 with the largest delegation ever by any country at the cost of the state.

Such profligate expenditure only goes to confirm that the government is not focused on fixing the real issues confronting the citizens for which they were voted.

Akufo Addo must understand that he does not need to fly to London with all these ministers if the investment climate in Ghana is attractive. Businesses are profit-driven, they will not, therefore, be attracted to a destination where the local currency is eroded quickly through depreciation, roads are bad, corruption is rife, among others.

Akufo Addo must bear in mind that he has a constitutional duty to manage the resources of our country with prudence to the maximum benefit of all citizens.

Most of the ministers who followed him to London, lodging in plush hotels at the cost of the state for over a week could have stayed back in Ghana and been productive to the state and the citizens who pay them through their taxes.

We call on Akufo Addo to stop the abuse of the public purse he promised to protect when he was sworn in as president of the Republic of Ghana on 7th December 2017.