Coup Plot: If You're A Man, Meet Me Outside – Defence Lawyer Dares Police Prosecutor 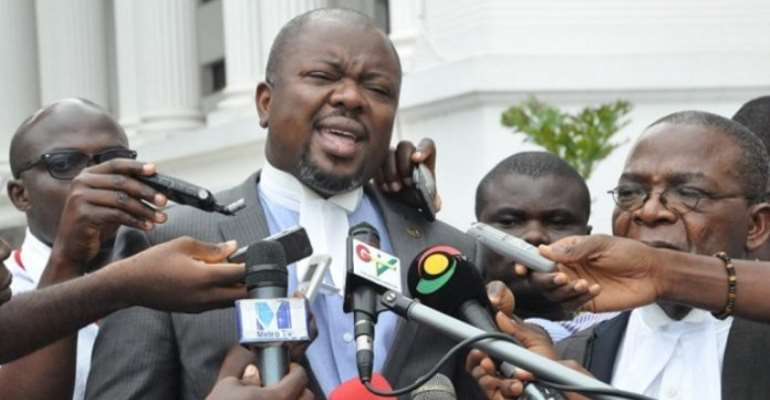 Lead defence lawyer in the case of the Republic versus Fredrick Mac Palm and nine (9) others, Victor Adawudu, today has challenged Police Prosecutor, Assistant Superintendant of Police (ASP) Slyvester Asare, to a fight outside the Court.

The invitation of the defence lawyer was made right before the District Court Judge Rosemond Dodua Agyiri, before who, Indictment proceedings are being heard.

The Police Prosecutor, Slyvester Asare, himself a lawyer, in responding to a complaint by Victor Adawudu, that his client was refused a request to be taken to the Police Hospital for treatment instead of the BNI hospital, asked the defence lawyer to be careful what he says about the BNI. This caution by the ASP did not go down well with the defence lawyer.

District Court Judge Rosemond Dodua Agyiri, intervened and calmed down tempers in her Court. To settle the issue that generated the argument, the District Court Judge ordered that the Accused person, Frederick Mac Palm, be sent to the Police Hospital at all material times should he require medical attention.

Earlier on before the contention, the District Court Dismissed an application by defence lawyers requesting for full disclosure of all the documents, evidence and files the Prosecution intends to rely on to establish their case against the accused persons.

The Court indicated that since the case is one to be tried by indictment, the District Court cannot ask the Prosecution to make any disclosures at this time. The Court ruled that disclosures will be made at the High Court as soon as Indictment proceedings are completed and the case is set down for trial.

The Court adjourned sitting to the 6th of February 2020.

Background
Information about the foiled Coup Plot first came to light in the country on the 23rd of September 2019, when the government announced that some person had been arrested after several months of investigations. The accused persons, Dr. Fredrick Mac Palm (1st Accused), Donyo Kafui A.K.A Ezor, Bright Alan Debrah Ofosu a.k.a Bright Alan Yeboah, Col. Samuel Kodzo Gameli, Gershong Akpah, W.0.2 Esther Saan Dekuwine, Cpl. Seidu Abubakari, L/Cpl. Ali Solomon, L/Cpl. Sylvester Akanpewon and ACP Benjamin Agordzo, are suspected to have masterminded a fifteen months plot to destabilize the country and possibly take over the government of the Republic.