KMA Justifies The Cut In Number Of Traditional Reps 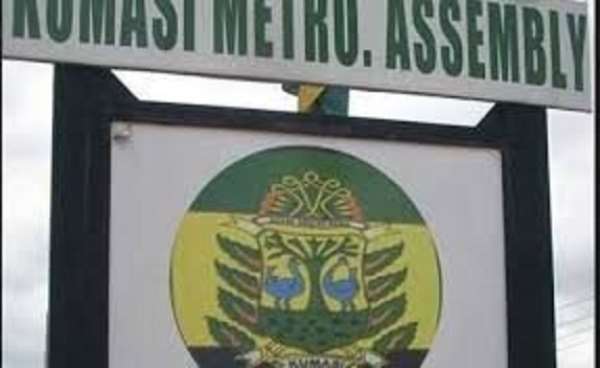 The Kumasi Metropolitan Assembly (KMA) has defended its decision to reduce the number of representatives from the Kumasi Traditional Council onto the Assembly.

During the swearing-in ceremony for the Assembly, on Thursday, the Bantamahene and Chairman of the Kumasi Traditional Council, Baffour Asare Owusu Amankwatia VI expressed concerns about the reduction of the number of representatives from five to one.

However, in a statement issued by the KMA, the assembly maintained that the numbers at KMA had been reduced to ensure that the council has a representative each in the seven Metropolitan and Municipal areas in the Kumasi enclave.

“Kumasi has now been split into seven Assemblies, namely, Asokore Mampong Municipal, Tafo, Suame, Kwadaso, Asokwa, Oforikrom and the KMA. As a result, Manhyia now has one representative each at all the Municipal Assemblies and two at KMA, making the total number of Manhyia appointees eight instead of the previous five”, the KMA noted.

The Manhyia Palace has sent a circular to the government declaring its intent to withdraw its membership from the various assemblies.

According to the Bantamahene, they have taken this decision because they believe there is an a ttempt to sideline traditional leaders in governance at the local level.

At the inauguration of New assembly members at the Kumasi Metropolitan Assembly, he indicated that traditional leaders are worried about the fact that their representation at the local level has reduced from five to one.“Slowly, the central government is reducing the influence of traditional leaders and the work we do in local areas. The reason I say this is first, our representation was five. Now it is down to one. Manhyia has sent circular to withdraw all the chiefs from assemblies because we don't know if it is an oversight or the government is aware or unaware,” the Bantamahene said.

Despite this move, he said this was not an entrenched position but insisted that there has to be some changes.

“Things are being done to the effect that we are being overlooked in the running of the local areas and we think that when it comes to the rural areas, we hold the power, we hold the authority, we mobilize them. They listen to us more than anybody else so things must be corrected,” he explained.

Some chiefs have in the past called for 30 percent representation in the membership in the local assemblies to enable them to participate better in the country's local governance.

The 70 percent of the membership of the local assemblies is elected during the District Assembly elections, while 30 percent is appointed by the government.

Though Article 276 (1) of the 1992 Constitution bars chiefs from taking part in party politics, the Constitution provides for traditional leaders to be appointed to public office positions.