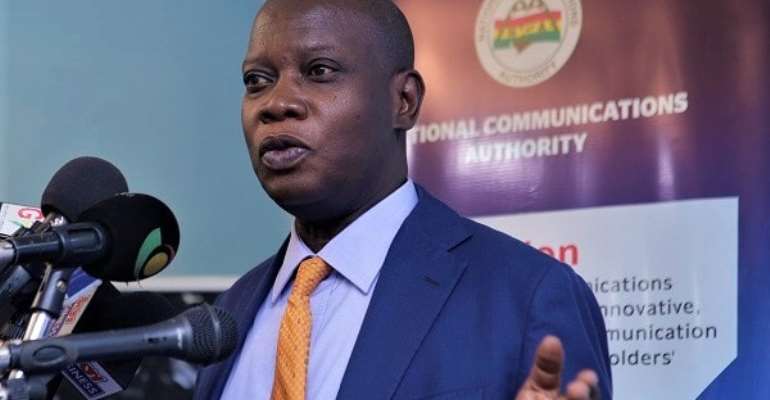 The immediate past Director-General of the National Communications Authority (NCA), William Matthew Tetteh Tevie has testified in court that he is not a thief.

“In my whole professional life I have never stolen anybody’s money,” he told the Accra High Court yesterday when he opened his defence.

They are alleged to have embezzled $4 million of state funds during the purchase of a cyber security surveillance equipment or listening devices for the National Security Council Secretariat (NSCS), which was sponsored by the NCA.

The accused persons have been charged with diverse counts of wilfully causing financial loss of $4 million to the state, stealing, conspiracy, money laundering, among other charges.

Evidence-in-chief
Led by his lawyer, Mr Godwin Edudzi Tameklo, to give his evidence-in-chief, Tevie refuted all allegations levelled against him in relation to the said embezzlement.

According to him, investigations into the case never established that he had benefitted personally from the purchase of the cyber security equipment.

“I gave all my bank accounts details to the investigation team and they did not make any adverse findings against me,” he told the court.

“It cannot be said that I have caused financial loss when the equipment has been paid for, tested, delivered and is in the hands of the Republic. I did not use my office for private gain. Of all the investigations that were done into the transaction, nothing showed that I benefited from this transaction,” he added.

Cyber security
The prosecution has made a case that there was no approval for the purchase of any cyber security equipment by the NSCS, which was to be sponsored by the NCA

Also, it has presented a case that the $4 million paid by the NCA for the purchase of the equipment was not approved and also not captured in the NCA’s budget.

The prosecution has also argued that the payment for the security equipment was outside the stated mandate of the NCA, as stipulated by law.

Tevie, however, refuted the prosecution’s arguments and contended that the NCA decided to provide institutional support for the NSCS to purchase the equipment because of the increased level of terrorist threats in the West African sub-region.

According to him, information technology was now a crucial tool in the fight against terrorism and, therefore, he decided to make cyber security a priority when he became the Director-General of the NCA in 2016.

On the issue of the funding not being captured in the budget, he said the budget was not “cast in stone” and could be varied at any time.

The former NCA boss will continue with his evidence-in-chief on January 28, 2020 at the court, presided over by Justice Eric Kyei Baffour, a Justice of the Court of Appeal with additional responsibility as a High Court judge.

Prosecution’s fact
Per the facts of the case, Baffoe-Bonnie, Tevie and Osman were allegedly aided by a private citizen, Oppong, to engage in the act.

According to the state, the previous administration had contracted an Israeli company, NSO Group Technology Limited, to supply listening equipment at a cost of $6 million to enable the authorities to monitor conversations of persons suspected to be engaged in terror activities.

The facts stated that the National Security did not have the money to fund the transaction, and for that reason, the NCA, which has supervisory jurisdiction over the use of such equipment, was asked to fund the project.

According to the state, the remaining $3 million was lodged in the account of Oppong, who acted as a representative of the local agents, Infraloks Development Ltd.

Osman is alleged to have fronted for the entire deal.

The state said the accused persons later laundered the amount for their private benefit.