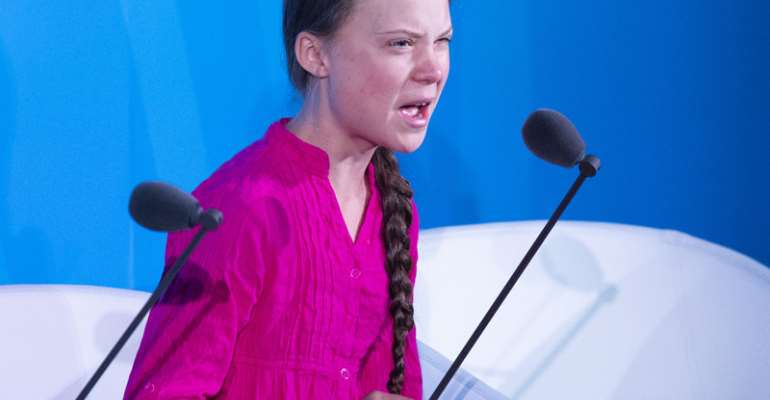 When a young girl, for that matter a teenager, stands before her parents and grandparents to utter certain words or statements such as “How dare you!”, “And you are still not mature enough…”, at them, will that amount to insulting and disrespect? With these statements in view, will she stand the chance of having her request granted (by these parents)? Moreover, are those statements going to have a harming effect on movement against climate change? This article is intended to attempt to answer these questions if only they are not rhetorical.

In Ghana, when a child needs something from their parents, even though they have the right to be given their needs, they must demand it in a respectful manner, not arrogantly or angrily. No parent will have likeness for an arrogant child and will likely not treat them special.

In Ghana, when a child tells a parent or an adult that he or she is “not mature enough” and “how dare you”, it is deemed a strong disrespectful remark and no parent or adult will take it so lightly on the child. At least until that child apologises and retracts such statements, he or she will not be in the good books and thoughts of the adult.

It is therefore not surprising that after 16-year-old Greta Thunberg’s speech at the U.N. Climate Change Conference, some people expressed disaffection for her and eventually meted hate words on her.

One Michael Knowles even had to call her “a mentally ill Swedish child.” In my view however, two wrongs don’t make right. If a child insults you as an adult, you do not insult her back; because, if you do, the child will have a justification in furthering her act (of insulting).

Notwithstanding the two strong ‘adulterated’ words said by Greta, there were some facts she made bare before the world leaders which cannot be overlooked.

Greta reminded all that today’s emission level is still high and poses danger to the health of the world’s citizens, especially children as she. And this is true. She explained that “The popular idea of cutting our emissions in half in 10 years only gives us a 50% chance of staying below 1.5 degrees [Celsius], and the risk of setting off irreversible chain reactions beyond human control.”

She went further to explain that the remaining 50% was sucking billions of tons of CO2 out of the air and technologies barely exist to help solve this. She stressed that “a 50% risk is simply not acceptable to us — we who have to live with the consequences” with the 420 gigatons of CO2 left to emit already reduced to less than 350 gigatons.

Greta’s heart beat fast with the fear that with today's emissions levels, the remaining CO2 budget will be entirely gone within less than 8 ½ years when already people are suffering and dying as the entire ecosystems is collapsing.

Greta Thunberg may have used some sort of harsh words against the world leaders but those words were borne out of intense emotion. At least basic psychology explains that when somebody becomes highly emotional, he or she will definitely act above or below normal. Greta would not have used those words if her emotion was in the normal. Not forgetting that when expectations are not met, high emotion will be the outcome.

In the case of Ghana, the government has plans to mine bauxite in one of its reserved forests – Atewa Forest. This Forest is internationally recognized as one of the highest priority ecosystems in West Africa for its high species diversity, high levels of endemism and great hydrological importance. It is also recognised as an Important Bird Area. Atewa Forest is a centre of significant plant diversity with at least 1100 plant species including 56 that are threatened with extinction. Above all, the water is a critical factor in ensuring water provisioning for more than 5 million Ghanaians and with added climate mitigation services.

Recently, residents living around the Forest enclave embarked on demonstration against the government’s intention to mine bauxite in the Forest considering the huge negative impact that action will have on climate change and the health of citizens. A number of CSOs have also advocated against that move by the government, asking for proof of a bauxite mining technology that protects forests, but it seems clear that the government will not give attention to calls of the residents and the CSOs.

Some traditional leaders in communities around the Forest decided not to reason with the residents and the CSOs and declared publicly that the government should proceed with the idea of mining bauxite in the Forest. This position is clearly against the renowned position of the Akyem Abuakwa Traditional Council that, Atewa is the right lung of Ghana and therefore must be protected at all cost.

With this kind of move - highly potential to destroy forest cover and harm biodiversity - when the residents become hyper against both the government and the traditional leaders, I am definitely sure that unpleasant words will come out of residents’ mouths against their leaders for appearing insensitive.

When that happens, which I know will surely happen someday, such unpleasant words would be said to come out of disrespect when in fact, it is to attract the leaders to see their seriousness in advocating for the Atewa Forest to be left untouched. This will not be different from Greta’s advocacy style at the U.N.

The advocates to save Atewa Forest cannot be blamed for their strong words if it gets to that, because the denial on the part of leadership will demand that.

At least everybody in the world gets affected by Climate Change. And Greta’s words have helped to increase pressure on world leaders to address climate change. No wonder former U.S. President Barack Obama called her “one of our planet’s greatest advocates.”

We cannot punish Greta because of her strong words; rather world leaders should hear her cry and grant her heart desire.

I weep for Ghana for allowing Medusa-like head judgement de...
33 minutes ago