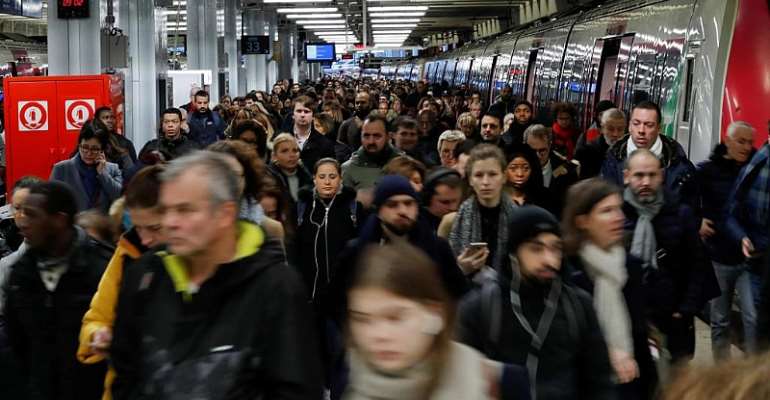 Commuters in France faced further travel chaos on Friday as left-wing trade unions threatened to "completely block" public transport in protest over pension reforms, due to be presented to the Council of Ministers the same day.

"It's now or never," Philippe Martinez, head of France's oldest and most militant union, the General Confederation of Workers, or CGT, warned.

The CGT along with unions Unsa and Solidaire, have called for a "black day" in public transport as their ongoing standoff with the government over pension reforms enters its 51st day.

The strikes had calmed down considerably this week with services both in the capital and on railways steadily improving.

But unions are determined to show the authorities they haven't backed down and are planning to shut metro lines, buses and train stations.

So on Friday, thirteen of the country's 16 metro lines will be severely disrupted but things won't be nearly as bad as when the strike first started on 5 December when 11 lines were shut completely.

Show of force
In the Ile de France region, six out of ten trains will be operating. On regional rail lines, seven out of 10 trains will be in function, though things should operate normally on TGV, Eurostar and Ouigo services according to the SNCF, barring disruptions due to flooding in the Occitanie region in southern France.

On the streets, unions are hoping to demonstrate a show of force with protests planned in Paris, Marseille, Bordeaux and Lyon.

The last major demonstration on 16 January brought together 187,000 people, including 23,000 in the French capital, according to the Interior Ministry. It was far less than the roughly 800,000 demonstrators who first turned out on 5 December.

Although the action itself is losing steam, unions are hoping to drum up public awareness about the "absurdity" of the draft bill, which is to be presented at Friday's Council of Ministers.

If the text is approved it will then be submitted to the National Assembly on 3 February.