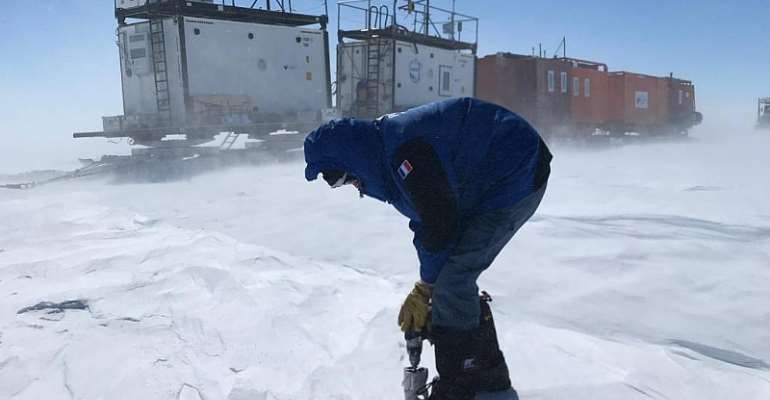 French scientists have reported on an international mission to one of the most desolate regions of Antarctica, where they spent more than a month gathering data to help predict sea level changes and understand the Earth's climate history.

The team, which includes 10 scientists, three logisticians and a doctor, spent most of December and January crossing one of the most arid and remote parts of the continent in one of the longest missions of its kind.

Having returned to the Franco-Italian research station Concordia, which sits about 1,600 kilometres from the South Pole, they reported details of their mission via satellite link to a comfortable room at the French National Centre for Scientific Research (CNRS) campus in Paris, more than 15,600 kilometres away.

“They travelled 1,370 kilometres from Concordia into unknown territory,” said Jérôme Chappellaz, director of the French Polar Institute, who was present at the CNRS to introduce the mission. “It's the first time scientists have ever gone there.”

Glazed surfaces and mega-dunes
Called the East Antarctic International Ice Sheet Traverse (EAIIST), the mission's aim was to gather snow and ice samples and install devices to better understand a landscape that scientists believe looked largely the same during the ice age.

“It's very flat, very white, very bright and quite cold,” said Pete Akers, an American postdoctoral researcher with the Institute for Environmental Geophysics in Grenoble. “Up here on the plateau, you're so high and so far from the ocean, it's hard for clouds, moisture and storms to get here.”

The team chose the plateau as a site for its research due to extreme dryness and isolation that mean the land contains some of the purest and oldest ice and snow on the continent. Scientists are also interested in two features of the landscape: glazed surfaces and “mega-dunes”.

Glazed surfaces are icy surfaces with virtually no snow accumulation that cover up to 1.5 million square kilometres of Antarctica, or as much as 15 percent of the whole continent.

Mega-dunes, surface undulations created by sustained winds spread over so large an area they are only visible on satellite images, cover another 500,000 square kilometres.

Understanding their age and formation is essential to interpreting the data contained in ice cores, long rods of ice drilled from the ground. The farther down from which the ice cores are extracted, the farther back in time they can measure the Earth's climate.

Compensating for rising sea levels
The mission was also designed following a report of the United Nations Intergovernmental Panel on Climate Change that identifies Antarctica as an unknown factor when it comes to rising sea levels.

“What scares scientists who specialise in the area the most is the instability of the Antarctic continent,” Joël Savarino said, comparing the continent with Greenland, where melting is increasing but in a predictable and essentially linear manner.

“With Antarctica, it's completely different,” he said. “There is the possibility of a catastrophic ice breakup on many parts of Antarctica. It's an unstable system…we already know of places where it's happening, but there are immense hydrographic basins that could be completely submerged.”

Scientists suspect a warming climate may also boost precipitation in the interior of Antarctica, boosting precipitation and thereby storing mass and acting as a kind of break to the sea level rise.

“What we expect in a warmer world is that more water from the ocean is transferred to the interior of the Antarctic continent to produce snowfall and accumulation,” Jérôme Chappellaz explained.

The EAIIST mission gathered hundreds of samples in order to understand how snow accumulates in the plateau over time.

“We are sure it will not be strong enough to compensate the amount of ice that is lost every year, but it's a partial compensation. The question is how much?” Chappellaz said, explaining that current climate models suggest the phenomenon could translate to 5 to 7 centimetres less of an increase by the end of the century.

“It doesn't sound like a lot, but we talk about a future sea level increase of 20 to 80 centimetres by the end of the century, which matters a lot to society,” he explained. “So this question of 5 to 7 centimetres that may be compensated in Antarctica matters for policymakers and decision makers.”