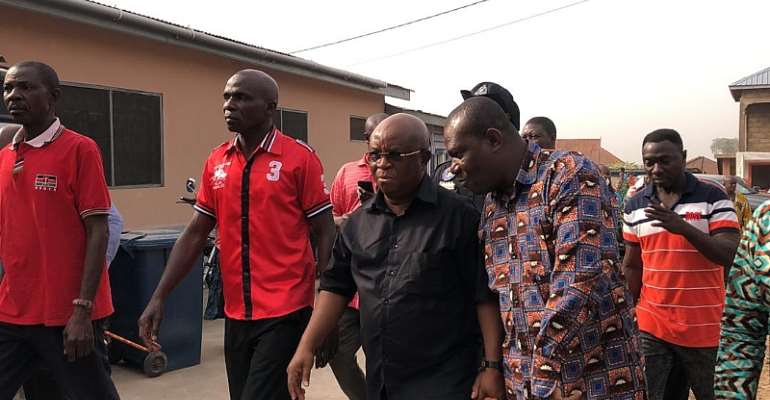 The Volta Regional Minister Dr. Archibald Letsa has appealed for calm in Dzolo Gbogame following the death of a resident in the area on Wednesday.

The deceased was allegedly ran over by an assembly vehicle being used for revenue mobilization because he was in debt.

Rampaging youth of the community in a reprisal attack, torched a stationary vehicle and damaged parts of the assembly building.

The Regional Minister who visited the community and inspected the damaged assembly office said no stone will be left unturned in investigating the various crimes that were committed.

“We came here to sympathize with the people on the loss of their son and to plead with them to be patient. We apologize to them for what happened. The government is going to investigate the issue, the attack on the journalist and the arson attack on the Assembly. So I have asked the Regional Commander to take over the inquiry.”

The individual believed to be responsible for the death of the resident earlier reported himself to the Police.

Speaking on Eyewitness News, the Public Relations Officer of the Volta Region Police Command, Corporal Prince Dogbatse, revealed that the individual, who is yet to be named, is currently assisting with investigations.

“Thankfully enough, the one who was responsible for this incident has actually reported himself to the police and is currently assisting us in our investigations,” he stated as he called for calm.

The police are yet to come out with a definite account of what caused the death of the resident, who has been identified as Wisdom Dake, because of conflicting accounts from the ground.

“There are bits and pieces of information out there but we need to refine it to give credible information to the public,” Corporal Dogbatse said.

Initial reports indicated that a task force collecting revenue for the assembly locked up the shop of the deceased because he was in debt.

In protest, Wisdom Dake stood in front of the taskforce's vehicle.

He was allegedly run over by the vehicle, leading to his death.