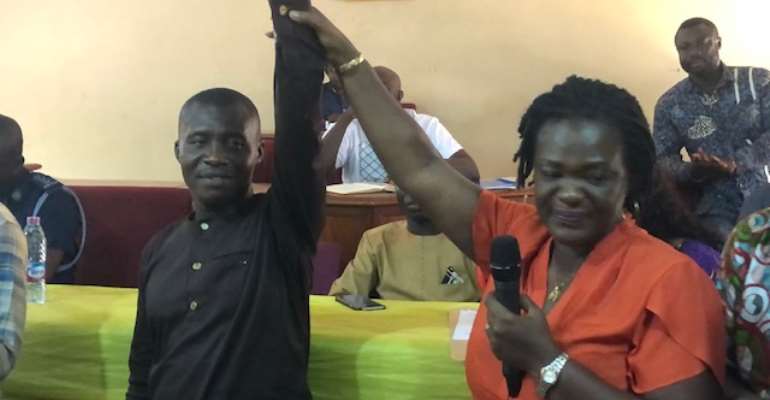 Today marked another milestone in the political history of Atwima Mponua as a veteran Politician, in the person of Honorable Charles Dwumfour of Okyerekrom beats his main Competitor, Honorable Justice Nkrumah Boateng of Bayerebon No.3 to win the coveted seat of the Presiding Member.

The day started on a low key as elected and appointed members of the Assembly started trooping in at the forecourt of the district Assembly so as to participate in their inaugural ceremony.

The program which started at 10:00 pm saw Nananom from most of the communities in the district, departmental heads, clergy, media, service commanders and the judiciary gracing the occasion in pageantry.

The Akwamuhene of the Nyinahin Traditional council, Nana Oti Boadua II was the chairman for the day in the stead of Nana Ampene Boateng Twum II. He spoke to the admiration of all and sundry as he asked the new members to live up to expectations. He admonished them to play a role that will put the district on the world map.

Giving his welcome address, Honorable Williams Darko expressed his delight for the day. He stressed on the unity and the brotherliness which he believes will be the bed-rock of the developmental agenda. He asked the members to exhibit high levels of professionalism in the discharge of their duties.

Honorable Martin Adjei Mensah-Korsah who gave the inaugural speech of the President tasked the Assembly Members to use their office to rake in more Internally Generated Funds (IGF) for the Assembly. “Use your office to get your indigenes to pay property rates, building permits and other taxes for the government”, part of the speech read. On sanitation, the Deputy Regional Re-organization Minister tasked the members to do their best to rid-off our streets and environments from rubbish.

On the 2nd round of the program, Honorable Charles Dwumfour locked horns with Honorable Justice Boateng for the seat of the Presiding member. The contest which had 56 honorable members to vote came to a stalemate as neither of the 2 members secured the requisite percentage to sail through at the first round. A heated lobbying was done in the second for Honorable Charles to secure 39(69.64%) as against 17(30.35%). The district electoral commissioner Mrs Cynthia Tuffour announced the results amidst shouts from the gathering public. Justice George Nibi of the Magistrate Court sworn-in the newly elected members and the Presiding member into office.

The newly elected Presiding Member, Honorable Dwumfour thanked his colleagues for the honour done him and promised to work with them to bring the needed development to the district.