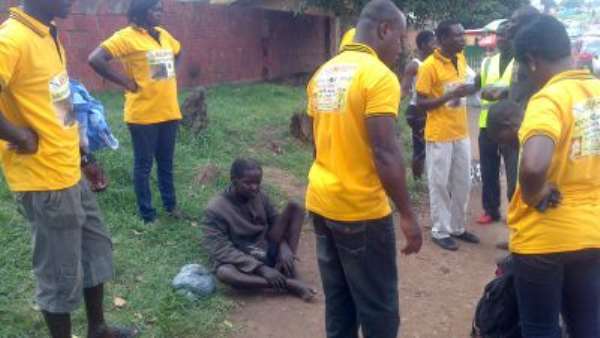 The sole aim of this not- for- profit- organization, MEMHREP, is to create the sensitization about mental illness and to draw the attention of the government to people who are mentally challenged and living on the streets. The major reason for the birth of this organization by the CEO Mr. Adu Gyamfi is to create awareness for the government to pay attention to individuals with mental health conditions, especially those living in the streets. Speaking with Adom FM, he said that it is quite worrying to leave these mentally ill patients on the streets unattended. He called on the government to establish more rehabilitation centers to house these people. With some, he explained, that the illness started progressively and got out of hand without medical attention. He advised that if the illness is diagnosed early and treated, hardly would we see any mentally ill patient in the streets.

In the course of the interaction, Mr. Adu Gyamfi elaborated that education about the prevention of mental illness could be taught in schools, churches and even at places of work with the help of the government. He made an appeal to the government to help build more rehabilitation centers in order to get these Nyame Adehye off the streets. He added that the planting for food and jobs would also help to set some of them up with jobs after recovery so that they can also help their families. He asked the government to aid the organization and other not-for-profit organizations. He bemoaned the fact that mentally ill people moving about in the streets does not speak well of the country, especially in situations where investors outside the country come, only to be met with such an embarrassing site.

He lamented further, that these people pose a threat to the public as well as local and foreign investments. He gives an instance where one of these Nyame Adehye destroyed the goods of a trader at Adum in the Ashanti Region. He’s therefore pleading with the government to aid the organization in taking care of the mentally ill patients because he has learned from his experience that we are blessed with new and innovative ideas whenever we lend a hand to someone or people in need.

MEMHREP is leaving no stone unturned in the fight against mental illness. The organisation is already providing care and support to persons living with mental illness in the Ashanti Region and even beyond. For the past 8 years, the NGO has been feeding, bathing and clothing the mentally ill persons on the streets of Kumasi metropolis and the 4 other regions at its own expense. Led by Mr. Adu Gyamfi, MEMHREP rescued a 4-month abandoned baby of a woman suffering from mental illness sleeping on the street in September, 2014. It also emerged the best institution in maize production in the Atwima Kwanwoma District in that same year during the National Farmer’s Day Celebration.

Currently, MEMHREP is in the process of building an ultra-modern state of the art Rehabilitation Centre to support our Community Mental Health Outreach Programme in the Effiduasi-Asokore District in the Ashanti Region. The centre will serve as a safe haven for persons living with mental illness across the streets of the Region and even those afar. Employable skills will be offer to them during their recovery process to avoid any relapse. Finally, reintegration of these patients back to the society through their families sets in after their recovery is fully complete. The organisation therefore is ever ready and fully prepared to help persons living with mental illness. With support from all concerned citizens, there could be a swift reaction to our course. Note that, mental illness is no respecter of persons. It’s now or never. Our support will give them hope. Every little help!