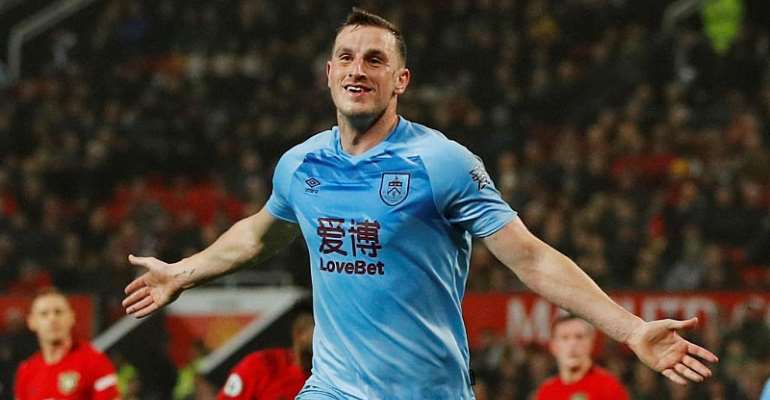 Burnley registered their second win over top six opposition in four days to ease themelves away from the Premier League relegation dogfight on Wednesday night.

While that victory at home at Turf Moor came as a surprise, success at Old Trafford was greeted as a shock.

A Burnley side had not won at the venue in the league since September 1962.

"We've worked very hard over the years to get some big nights and big moments on behalf of the club," said Dyche.

"There's still something special about playing at Old Trafford and winning here especially for our fans."

Solid
Dyche's men took the lead just before half time through Chris Wood. Jay Rodriguez doubled the advantage after 56 minutes.

The terraces responded to the lacklustre performance of the United players with criticism of the club's hierarchy.

The majority of Old Trafford was on its feet when chants of: "Stand up if you hate Glazers" echoed around the ground in reference to United's owners. United's executive vice-chairman, Ed Woodward, was also subjected to jeers.

The handful of United supporters who remained in the stadium booed the players at full-time.

Despite the defeat, the United boss Ole Gunnar Solskjaer urged patience for the youngsters in his side.

Effort
"The boys have given everything they've got," said the Norwegian. "They are experiencing this period for the first time in their lives, some of them.

"It's very difficult for them. The expectations of this club as well are high and some of them have played 10, 12 or 15 games. It's not easy for them.

"When you're at Man United there's always going to be criticism. I'm going to be here to help them get through this.

"We can't do anything but hold our hands up and say: 'This isn't good enough for this club.'"

Change
For all the brickbats, United are fifth, six points off fourth-placed Chelsea who occupy the fourth and final slot that leads to next season's Uefa Champions League.

Burnley's array of journeymen harbour no such expectations. And in the aftermath of the win, Dyche hailed his players' fortitude and the patience of the fans.

"The supporters came in their numbers to see us at Old Trafford. They were also great in the game against Leicester despite us being a tough run and then you have the weirdness of football ... We've taken six points off two sides from the top six and it all looks different.

"That's the marvel of the modern game and the Premier League and how quickly it turns and shifts and looks different."