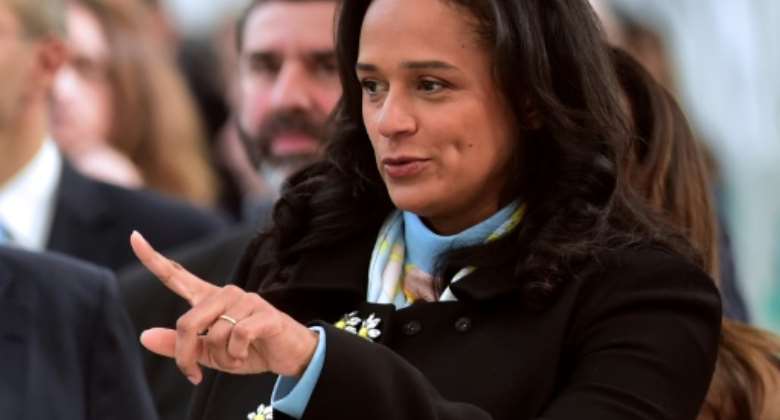 Super-rich: Dos Santos has a fortune estimated at more than $2 billion. By MIGUEL RIOPA (AFP/File)

After years of life among fellow jet-setters and the super-rich, Angolan billionaire Isabel dos Santos today finds herself mired in scandal as accusations mount that she systematically looted her impoverished country.

The British-educated tycoon and eldest daughter of ex-president Jose Eduardo dos Santos has been charged with top-level financial crimes by prosecutors who want her return home for questioning.

She is accused of embezzlement, money-laundering and influence-peddling from her 18-month tenure at the helm of Sonangol, Angola's state-owned oil giant.

For many Angolans, the charges will simply resonate with her nickname -- "The Princess." Forbes magazine says the 46-year-old is Africa's richest woman, with assets of more $2.1 billion (1.89 billion euros), including holdings in major banks and telecoms firms.

The allegations -- and the image of the idle rich -- are strongly rejected by dos Santos.

She prefers to show herself as a hardworking businesswoman with clean hands, whose acumen is bringing money and jobs to her native Angola. She is a victim of a witchunt, she says.

Dos Santos was born in Baku, Azerbaijan where her father met her Russian-born mother, Tatiana Kukanova, while studying.

Her family moved to Angola soon after her birth.

She has said she had an ordinary childhood, walking to school -- and selling chicken eggs for profit -- even after her father became president in 1979 as the country descended into a long and bloody civil war.

"I'm not financed by any state money or any public funds. I don't do that," she said in an interview with the Wall Street Journal in 2016.

"I'm tremendously independent, I always had this wish to stand alone and not be in my parents' shadow."

When her parents separated, she moved with her mother to London, attending an elite private school and then taking a degree mechanical and electrical engineering at King's College.

She said she lived in basic student accommodation in London, and worked so hard that she had little time to party, especially with parents that she remembers being "very demanding".

In 1992 she moved to Angola after her father secured a brief civil war truce with the rebel UNITA movement.

Her first business venture was three years later when she opened Miami Beach restaurant in the capital Luanda, aged just 24.

Today she is married to art collector and businessman Sindika Dokolo who is from the neighbouring Democratic Republic of Congo, and they have three children.

During her father's 38 years as president, Dos Santos rarely gave media interviews and made only occasional appearances in public.

She made the headlines after being photographed with her father and US singer Mariah Carey at a concert in the Angolan capital Luanda in 2013.

Africa's 20 billionaires in 2020, including Angola's Isabel dos Santos, according to Forbes.. By Gal ROMA (AFP)

The concert, sponsored by one of her companies, sparked fury as Carey was reportedly paid a million dollars for singing in a country with a grim human rights record, widespread corruption and abject poverty.

In recent months, dos Santos has taken to the media, especially Twitter, to defend herself against the corruption allegations.

Before her father stepped down, she was viewed as his possible successor.

Recently she told the Portuguese state broadcaster Radio e Televisao de Portugal (RTP) that she would consider running for president in the next election in 2022.

She left Luanda shortly after she was deposed from Sonangol and now moves regularly between Lisbon and London.