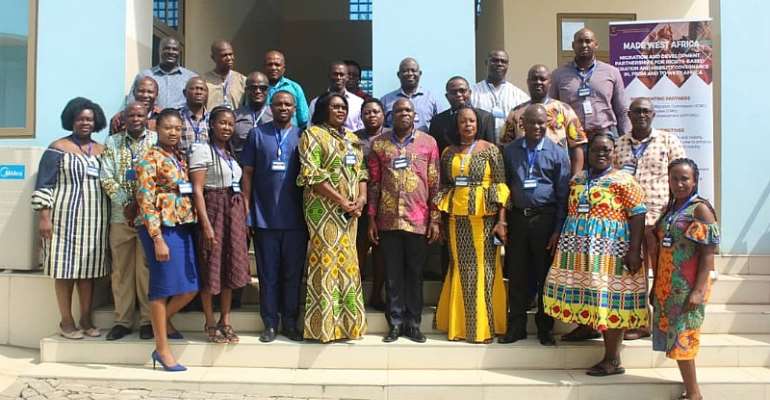 West African countries have been told to align their national laws to the protocol on Free Movement of Persons within the Economic Community of West African States (ECOWAS).

The call follows findings of the MADE West-Africa study report on the implementation of the ECOWAS Free Movement Protocol which indicated the lack of coherence of some aspects of the protocol with national laws as one of the major obstacles.

“Once we have signed the protocol it binds us so, perhaps, it is time we look at our national laws and see how we can harmonize the two for our benefit, said Professor Mariama Awumbila, Coordinator of the Migration out of Poverty Consortium, (MOOP) Ghana.

She was speaking with DGN Online on the sidelines of the MADE West-Africa joint inter regional multi-stakeholder workshop in Koforidua, to enhance the capacities of stakeholders in addressing challenges associated with the full implementation of the ECOWAS Free Movement Protocol in Ghana and Sierra Leone.

Professor Awumbila said since the Protocol was adopted in 1979, a number of supplementary protocols have been designed to facilitate the flow of goods, services and labour within the ECOWAS region.

She however noted that while there has been significant achievement in the domestication of the protocol within ECOWAS the rights of residence and establishment has been quite poor.

She said the inconsistency in some aspects of the Protocol and national laws often resulted in harassment of community members in countries other than their own.

For instance, she said, the Ghanaian law forbids non-nationals from engaging in retail business meanwhile, “the ECOWAS protocol allows rights of residents and establishment and so they are allowed to work so there is this contradiction in the Ghanaian national law.”

Professor Awumbila therefore recommended the mainstreaming of the protocol into the training programmes of the that officials dealing directly with its implementation, 'so that once it is mainstreamed and it is part of the training and capacity building programme the challenges we have will reduce.'

Director of the Center for Migration Studies, Professor Joseph Teye, presenting the key findings of the MADE study report, said empirical evidence identified challenges like low knowledge of the protocol among citizens, and lack of data management information system within the West African region.

He therefore called for increased education and awareness creation on the free movement protocol adding that the media is a critical stakeholder to ensuring the public is aware of the provisions in the Protocol.