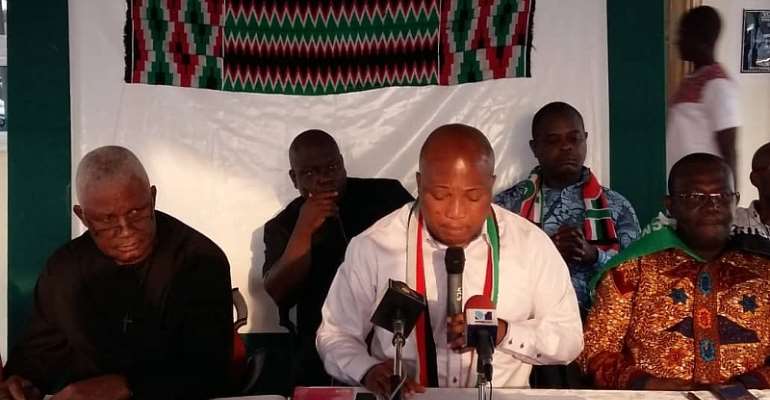 The opposition National Democratic Congress (NDC) is now distancing itself from individuals and groups who are claiming to have seceded from Ghana to form an imaginary Western Togoland.

The Head of the Communication Committee of the party in the Volta Region where the group was formed, Samuel Okudzeto Ablakwa, described the activities of those promoting the secession as one that threatened national cohesion.

He claimed at a news conference on Wednesday that there was no way the NDC, despite having the Volta Region as its electoral stronghold, would support any attempt to secede the region or any part of Ghana.

He stressed that the party does not support the Homeland Study Group Foundation (HSGF), the group leading the secession activities.

The HSGF, led by 85-year-old Charles Kormi Kudzordzi, popularly known as Papavi Hogbedetor, have been advocating the creation of a new country called Western Togoland from Ghana.

Curiously, anytime the NDC is ruling Ghana, the group goes underground but when the New Patriotic Party (NPP) comes to office, these so-called secessionists step up their Western Togoland agenda.

The group stepped up its activities in 2017 and claimed to have declared independence late last year. Some of its leaders have since been arrested, while its leader is currently on the run.

The latest to be arrested is Bestway Zottor, Director of Radio Tongu, picked up for allegedly promoting secession agenda on radio.

Members of the group are alleged to have called on members of the Volta Region NDC to strongly support their agenda.

Okudzeto Ablakwa, NDC MP for North Tongu, reacting in Ho on Wednesday, said, “We do not support the Homeland Study Group Foundation (HSGF) because Ghana is the only country the NDC knows. We are not the only border region in Ghana and the continuous targeting of the region is inimical to national cohesion.”

Mr. Ablakwa also urged the people of the region to desist from supporting the group and rather support the NDC, which he claimed is the only party committed to transforming the region.

He said the 'grievances' and 'desires' of the people have been factored into the party’s “People's Manifesto” which would soon be launched, adding that the next NDC government under John Dramani Mahama would undertake policies that would touch the very lives of the people.