Even After All, Thousands Of NPP Supporters Know About The Inefficient Leadership Of Akufo Addo 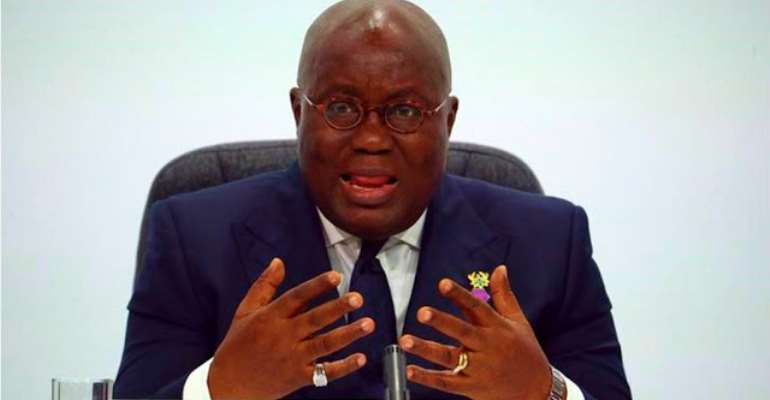 If anyone thinks the current Ghanaian leader, Nana Akufo Addo, doesn't know that his government has performed very poorly, since taking office three years ago, then the person is deceiving himself.

Apart from Akufo Addo himself, many NPP supporters know that Akufo Addo has burning ambitions to be a president, yet he lacks knowledge in running effective leadership.

When persuasion fails, force is applied, definitely, when it comes to leadership failure too, desperate people will always find ways and means to hold on to power.

Since coming to office, the NPP keeps accusing the NDC of the economic and political mess, yet Akufo Addo is the only Ghanaian leader who has appointed such a huge number of ministers.

I don't know how many ministers Akufo Addo needs to clean up this mess he has been talking about since 2016. The truth is Akufo Addo is not an efficient leader and he knows it himself.

Since he is a bad leader, NPP politicians will never stop accusing the NDC of the political and economic mess. They will continue to do so, even if they win the 2020 elections.

Akufo Addo has no brain to run a successful government, create employment and fight corruption since the judiciary system in the country is sorrowfully corrupt.

He started his leadership with an idea of building a Cathedral, while many banking institutions have collapsed, the country experiencing a high unemployment rate, poor educational facilities, weak judiciary and health systems. What kind of a leader is this?

The biggest disgrace Akufo Addo feared and wouldn't let it happen despite the inefficiency of his government is to lose the elections, therefore, he is laying a solid foundation to help him retain power.

His involvement in corruption scandals, his hold up in Nyantakyi’s pocket, the death of journalist Ahmed Hussein-Suale, his nepotism characterized government, abortive coup attempt, etc, all pose as a threat to him, no matter how brave he wants Ghanaians to see him.

Therefore, Nana Akufo Addo is systematically and cunningly doing somethings to facilitate his chances of winning the elections.

After buying his way through Ghanaian politics by promoting over 6,000 police and immigration officers, Akufo Addo is never satisfied and wants to do more to secure his victory under his poor leadership.

The recent new currencies of 100 and 200ghc should not be in circulation. Despite all the warnings, Akufo Addo refused and ordered the Central Bank of Ghana to issue the currencies, knowing well it will not help the current catastrophic economic situation in the country.

Now that the cedi has depreciated, they have set up a committee to investigate the rapid depreciation of the cedi in the country, fools. How can such a party in which ministers have no vision and knowledge on how to lead a country, have such massive support?

Evidently, you see the frustration of many Ghanaians and their loss of confidence in the former government, the NDC, which has been an advantage for a very bad political party, the NPP, in power today.

The political woes in Ghana are not yet over, you'll see more after the NPP secure another victory in 2020.

Ghanaian lady who survived acid attack in Saudi Arabia under...
1 hour ago