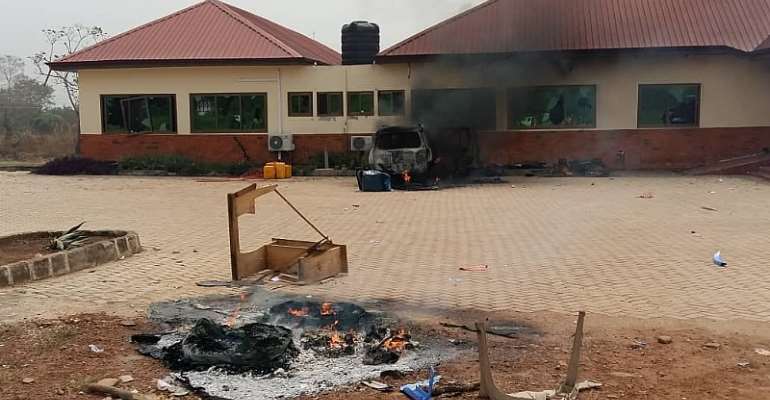 There is high tension at Dzolo- Gbogame and Dzolokpuita; capital of the Ho West District where irate youth have attacked the assembly office and set a vehicle ablaze.

They also set tyres ablaze at the entrance and chased the District Chief Executive (DCE), Ernest Victor Apau and his staff out of the office.

Journalists who had gone to ascertain facts on the ground were chased away.

The attack came minutes after the assembly's vehicle is alleged to have killed a resident when staff of the assembly were collecting revenue at Dzolo-Gbogame and adjoining community to Dzolokpuita, where the assembly office is located.

The youth blocked the main road at Dzolo-Gbogame for more than two hours, refusing vehicles from either side from moving until the Police intervened and picked the corpse from the side of the road where the incident had happened.

Although the DCE, Ernest Apau confirmed the incident, he declined commenting further for what he described as a security and sensitive issue.

Nonetheless, some eyewitnesses who spoke to DGN Online said the whole incident started Wednesday, January 22, 2020 at about 10:30 am.

One Bernard narrated that the decease who has been identified as one Wisdom Dake Carl had some altercation with assembly staff who were on revenue mobilisation exercise at Dzolo-Gbogame.

Wisdom whose shop is located along the main road is alleged to have been in default.

This made the staff lock up the shop.

However, before one could say jack the revenue mobilsation vehicle had drove over Wisdom who is now reported dead.

The incident infuriated youth in Dzolo-Gbogame who chased the vehicle in an attempt to get the driver.

They blocked the road, cordoned off the spot where Wisdoms corpse lied and prevented vehicles from either side from moving for over two hours until Police intervened.

Another group joined by some residents from Dzolokpuita moved to the assembly office, blocked the entrance and set some tyres ablaze, smashed windows and set a vehicle ablaze to ashes.

Journalists who attempted to get details had they fair share as they narrowly escaped being lynched. “We were chased out without the opportunity to be heard,” Lambert Atsivor of Voltaonlinegh said.

He added that the youth smashed the tablet of the Ghanaian Times reporter who attempted to take photos as well as the driver-side window of the Ghana News Agency Pick-up truck. They had to use another route to escape, he added.

The three said they had been traumatized by the incident as they heard threats on their lives. Lambert revealed that “I am still getting flashbacks from the incident; in a split second it looked like we were about to lose our lives. We would have become the breaking news, had we not drove off.”

The other picture shows the deceased’s corpse being carried away by the Police.

I weep for Ghana for allowing Medusa-like head judgement de...
39 minutes ago