Wolf seen in Charente region for first time in 100 years 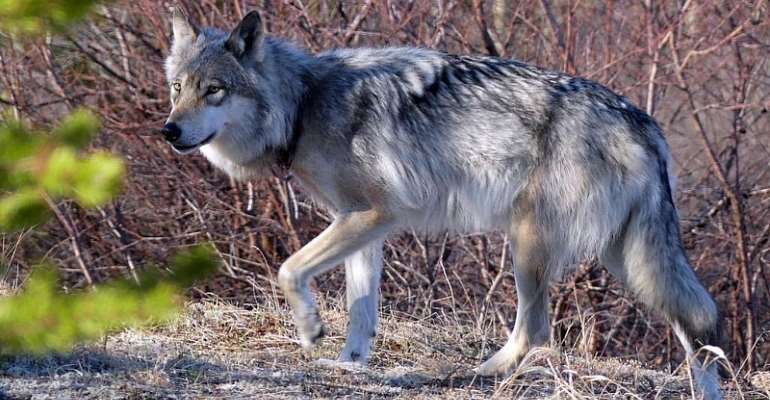 French officials have confirmed the sighting of a grey wolf in the southwestern department of Charente for the first time in nearly a century.

The French Office for Biodiversity (OFB) confirmed a grey wolf had been sighted near the Charente department's border with Dordogne after a local woman spotted the animal in her car and filmed it with her smartphone around 10 am on Monday.

“I just dropped off my son at his nanny's and was going home when I saw it. It passed within two or three metres of the car,” Marina Varraniac-François, 28, told Le Parisien newspaper.

“At first I thought it was a large dog, but it looked a lot like a wolf. It was afraid, you could tell it was frightened.”

The sighting happened less than a kilometre from Varraniac-François's home in the hamlet of Gurat. The video shows the wolf trotting down a country road in broad daylight before turning and running across a pasture.

The last time a wolf was seen in the area was in 1926. The Charente Libre newpaper reported on 19 September 1926 that a wolf killed 11 sheep in the commune of Hiesse, on the department's northern border with the Vienne.

Lone wolves looking for territory
There was “nothing surprising” about the sighting, which “corresponds to typical behaviour” of grey wolves, the OFB's Yann de Beaulieu told AFP.

Individual wolves can leave their packs in autumn and early winter, travelling up to 800 kilometres in search of new territory. Officials estimate the nearest pack to be several hundred kilometres to the east, on the rocky plateaus of the Massif Central.

But the sighting in Charente does align with wolves' ongoing expansion across French territory.

Hunted to extinction in France in the 1930s, wolves began to reappear in the Alps in the 1990s, crossing over from Italy.

Officials estimated there were 530 wolves in France at the end of the 2018-2019 winter, up from 430 the previous year. Most are concentrated in the Alps and eastern regions, but they have bene spotted as far afield as Burgundy, the Paris region and even the Somme in the north.

In the southwest, sightings were confirmed in Dordogne in 2015 and Pyrénées-Atlantiques in 2018 and 2019.

Problems for farmers
Officials said humans had little to fear from the predators.

“Wolves, even if they can be curious, are naturally fearful,” Jean-Yves Morellec, head of the OFB in Charente, told Le Parisien. “They prefer expanses with little human presence and a high density of ungulates, deer, roe deer and wild boars.”

They have also been known to attack sheep and other herd animals, leading to regular protests from farmers.

The OFB employs a network of agents and partners to monitor populations of activities of wolves, and the state occasionally authorises culls to keep their numbers in check.