How music helps us understand displaced communities in Uganda

By Dominic D.B. Makwa - The Conversation 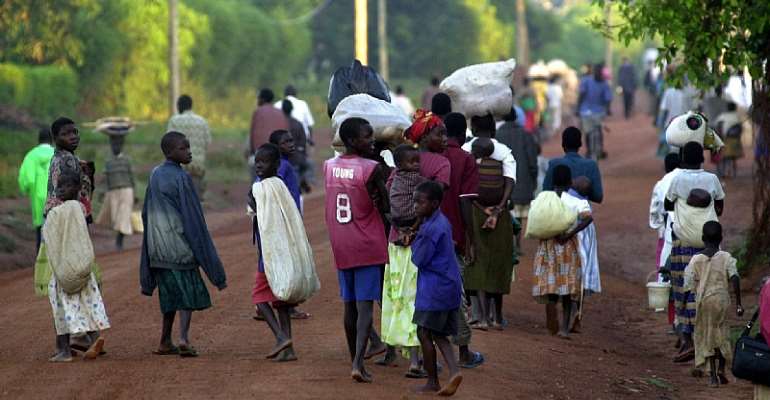 Studies dealing with displacement have shown that music is among the vehicles the displaced adopt to communicate their grievances.

For the Ugandan survivors of a landslide who are relocated to a faraway camp, for example, music becomes the most effective mode of communication. That's because music can play a dual role: it entertains while at the same time passing on specific messages to listeners. And due to its ability to use metaphors, music communicates on different levels to different people. One song can be interpreted differently by more than one person.

Because of these unique qualities, my research found, it is easier to communicate through music to deliver important and sensitive messages that cannot be comfortably conveyed through daily speech.

Bududa is a district in Bugisu, located along the slopes of Mount Elgon in Eastern Uganda. It has had a history of landslides which have negatively affected the life of its inhabitants.

Landslides involve soil mixed with boulders moving down steep slopes and burying people's farms, animals and houses in the process. Although landslides leave behind survivors, many people are buried under the rubble.

The Nametsi landslide put Bududa in the headlines. It occurred on 1 March 2010 and is the most severe landslide recorded in Uganda's history. It destroyed entire villages – hitting Nametsi, Namasheti and Kubehwo in the Bukalasi sub county. The landslide officially killed about 100 people but left a further 300 people unaccounted for and over 1,000 survivors homeless. Because there was no place to resettle survivors in Bududa, the Ugandan government relocated them to Panyadoli Camp in Southwestern Uganda, adjacent to the Kiryandongo Refugee Camp, the latter created for international refugees. 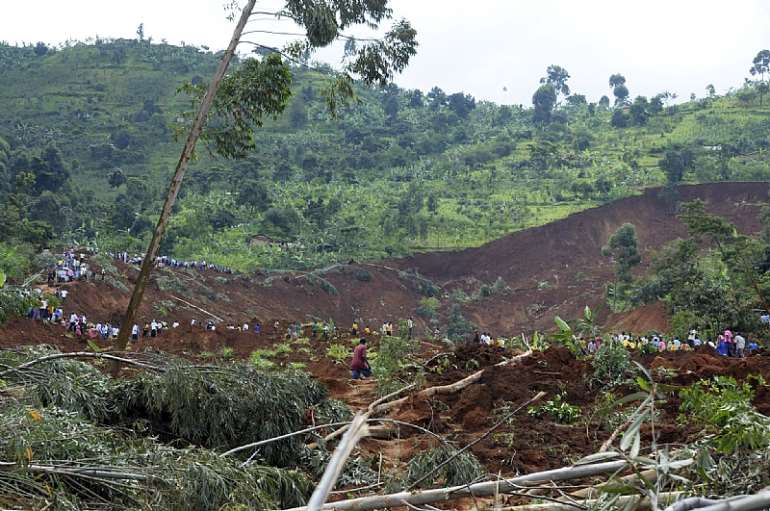 Workers search for bodies at the scene of a landslide in Bududa district in 2012. The eastern Ugandan region is regularly devastated by these natural disasters. EPA-EFE/RONALD KABUUBI

Panyadoli is located in Kiryandongo District, far from Bududa, with almost 400km between them. Despite the odd hill, the place is generally flat. The sparse population explains the abundant bushes, which harbour snakes and other animals. In this place, there are almost no streams where people can fetch water. When the landslide survivors arrived, the only source of water was one borehole to serve a community of over 300 people. Other social amenities including schools, health facilities and markets were far from adequate.

Apart from cultivating the two-and-a-half acre piece of land the government allocated them, few economic opportunities were available to the landslide survivors. They could not sell coffee or engage in other businesses as they had in Bududa. To compound it all, most landslide survivors could confidently speak only one language – Lugisu. Lugisu is the language of the Bagisu, who are the majority in Bududa. Communication as they interacted with host communities in healthcare centres, schools and markets was a huge challenge.

As most of the landslide survivors had lived in their villages all of their lives without ever relocating, I wanted to find out how they were coping with life in their new home. What facilities were at their disposal? How different are they from what they had in Bududa? In cases where they were not happy with the government's intervention, how do they communicate their grievances? 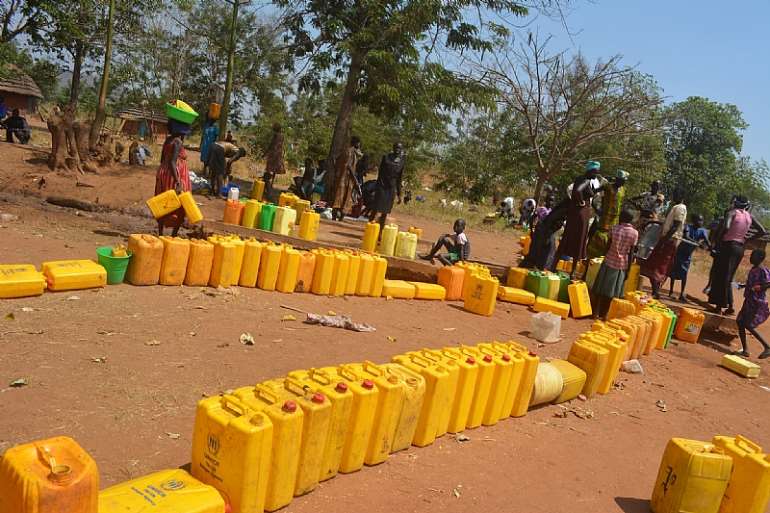 A typical scene at a resettlement camp in Uganda, where jerry cans queue up at the only water source in the camp. Dorah Ntunga/Oxfam/FLICKR

The story of a song

Different forms of communication were used by Bududa landslide survivors to articulate their experiences in Panyadoli Camp. Having meetings with different stakeholders was one of the means of communication. However, because of the ability to disguise the message through entertainment, music became the main vehicle for communication.

Music was adopted because these survivors did not feel comfortable to complain directly about land, the social amenities provided and how contracts for constructing their houses were awarded. Another tricky issue was theft, where they thought the police knew the people who were stealing things in the camp but were just covering up. The landslide survivors noted that whenever they tried to complain about these issues, authorities looked at them as ungrateful people who could not appreciate anything, though they'd had nothing when they were relocated to this camp.

When women from the Bududa Women Association performed the song Obu Bulamu Bweesi Khuli Nabwo (This Is The Life We Have), their aim was to dramatise these issues that were negatively affecting them.

Through this song, women talked about the nature of the shelters they were staying in. They talked about weak tarpaulins they had received from the Office of the Prime Minister and how these exposed them to rain. The author recorded the women of the camp performing This Is The Life We Have.

They also used this song to talk about corruption in the camp. A case in point was when they argued that the seeds they had received for planting were not supplied by the Office of the Prime Minister as had been claimed. The seeds had in fact been given by the church.

The song communicated about poor health services, waterlogged fields, the shortage of food and their inability to speak English and Kiswahili, the 'languages of the camp'.

And it addresses the thefts in the camp. The lyrics point to the police guarding the camp as the root cause of this problem. The song was also a call for transparency around the awarding of contracts for the construction of houses for the landslide survivors.

The power of metaphor

This song used metaphors to embed its messages. For example by singing, 'Water has finished our food', these women were indirectly saying that the plots of land given to them were waterlogged and therefore could not yield much food. Similarly, by singing, 'Up there, they (children) were going to school', they were referring to Bududa as a place with schools where their children used to get education. 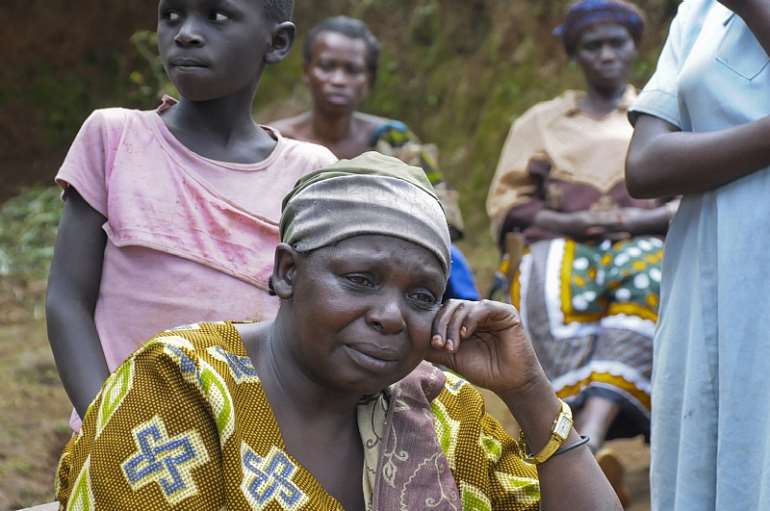 A village woman mourns as she sits at the scene of a landslide in Budada, Uganda. EPA/RONALD KABUUBI

Songs of this nature could be sung before any audience. However, I also realised that such music was mainly performed before 'visitors' from Bududa. As other scholars have argued, displaced people never stop associating with those they left behind. Anybody who visits them is looked at as a possible mediator, someone who can present their grievances to relevant authorities. By singing this song in my presence, the landslide survivors looked at me as someone who could readily pass on their message to government and other authorities that could help them.

This research is significant in the contemporary period especially as relocation of people across the world has become rampant due to political instability and natural disasters. As governments and the United Nations grapple with resettling people, they need to pay attention to alternative means that displaced people use to communicate their concerns. Such communication channels can be harnessed to understand exactly what such people want in order to avoid tension which may cause more unrest.

Dominic D.B. Makwa does not work for, consult, own shares in or receive funding from any company or organization that would benefit from this article, and has disclosed no relevant affiliations beyond their academic appointment.