Why the Gambia's plea for the Rohingya matters for international justice

By Kerstin Carlson - The Conversation 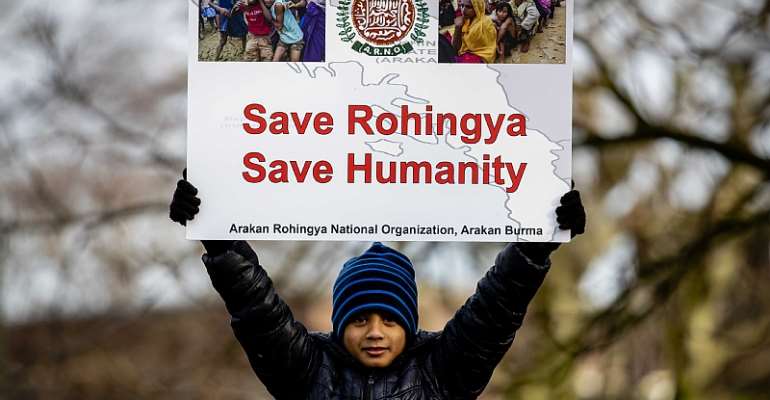 A protester supports the Rohingya outside the Peace Palace in The Hague, Netherlands, on 10 December 2019. - Source: EPA-EFE/Sem van der Wal

In early December, the International Court of Justice heard arguments filed by the Gambia against Myanmar for violations of the Genocide Convention. This included a request for “provisional measures”, asking that the UN court immediately order Myanmar to cease genocidal activities and to report to it within four months.

Under the 1948 Genocide Convention any member state can bring a claim against any other and be heard by the International Court of Justice. This is in keeping with the principle that the act of genocide harms all of humanity, not just those directly involved in it. Yet the case against Myanmar is only the third invocation of the Genocide Convention before the UN court. It is the first case ever to consider acts and actors of non-contiguous, non-warring countries.

But even a successful judgement on provisional measures may still not bring relief to the minority Rohingya community in Myanmar or Bangladesh. Provisional measures against genocidal acts have an unfortunate history. The International Court of Justice issued them in 1993 against Serbia, for example, and this did not prevent the 1995 Srebrenica massacre.

Moreover, even though legally binding, enforcement of provisional measures will prove difficult. In the meantime the Rohingya are still being persecuted and killed in Myanmar. They are also increasingly unwelcome in Bangladesh.

Yet the Gambia's invocation of the Genocide Convention remains politically and legally significant, not least for the potential it signals about the application of international law by actors in the global south.

The Gambia emerged from 22 years of dictatorship in 2016. President Adama Barrow came to power on a human rights and anti-corruption platform. He has embraced the case, which has been vigorously pursued by his justice minister, Abubacarr Tambadou.

In 2018 Barrow told the UN General Assembly that his government would “champion an accountability mechanism” for crimes against the Rohingya.

Tambadou worked for 13 years in the Office of the Prosecutor of the International Criminal Tribunal for Rwanda. In 2017, he travelled to Bangladesh for the annual meeting of the Organisation of Islamic Cooperation. This is an international organisation open to countries with a Muslim majority and which the Gambia currently chairs.

Meeting refugees in the settlement of Cox's Bazaar in Bangladesh convinced Tambadou of the need for his country to “use our voice” to assist the Rohingya.

Two central points emerged from the December hearing on provisional measures. First, the hearing reiterated how Myanmar, in the person of the once-celebrated human rights advocate Aung San Suu Kyi, categorically denies the atrocities for which there is overwhelming evidence.

The Gambia, led by Tambadou, relied almost exclusively on evidence collected by UN fact-finding missions, which are officially constituted and rigorously vetted. Yet Aung San Suu Kyi rejected these findings in favour of Myanmar's internal investigations, and concluded:

It would not be helpful for the international legal order if the impression takes hold that only resource-rich countries can conduct adequate domestic investigations and prosecutions, and that the domestic justice of countries still striving to cope with the burden of unhappy legacies and present challenges cannot be made good enough. The Gambia will also understand this challenge with which they too are confronted.

In this way, Aung San Suu Kyi borrowed from both neocolonialism and “fake news” populism in constructing her argument.

Second, the hearing emphasised how narrowly the International Court of Justice has previously drawn the definition of genocide. In the two previous cases invoking the Genocide Convention, the court declined to find state-sponsored genocide, due to its interpretation of the Convention's “intent” element. As the court stated in its 2007 judgment Bosnia-Herzegovina v Serbia:

It is not enough that the members of the group are targeted because they belong to that group, that is because the perpetrator has a discriminatory intent. Something more is required. The acts listed must be done with intent to destroy the group as such in whole or in part.

Aung San Suu Kyi specifically invoked this judicial history throughout her address to the court.

The prominent international law scholar appearing on behalf of Myanmar, William Schabas, pushed this definition even further. He argued that the International Court of Justice's jurisprudence suggested that the correct understanding for genocidal intent was necessarily the absence of any other explanation for a state's conduct.

Myanmar submits that the information in the application and in the materials invoked in its support … provide ample evidence to indicate alternative inferences…. Should the Court agree that there is ample support for an alternative explanation, then it cannot but conclude that the application has no reasonable chance of success on the merits. Not a 50 per cent chance. Not a 25 per cent chance. No chance.

Schabas went on to cite the International Criminal Court's investigation into deportation of the Rohingya as a demonstration of the kinds of “alternate inferences” that would disallow the court to find the requisite genocidal intent.

Schabas developed this definition through an analogy of how domestic criminal law categorises crime. This interpretation would destroy the possibility of finding states responsible for genocide, however. This is because it is impossible to intentionally destroy a group in whole or in part, which is the core of the legal definition of genocide, without committing other international crimes along the way.

This distortion of the Genocide Convention perverts both its purpose as well as the International Court of Justice's past jurisprudence, and seems unlikely to be adopted by the court.

The Gambia and Myanmar are a world away from one another. Nevertheless, in bringing a case against Myanmar, the Gambia represents “humanity” rather than Africa or world Islam.

The curiosity and surprise that have met the Gambia's bold step remind us that this universal mantle is rarely worn by African countries. The Gambia's initiative signals a promising new direction.