We don't know how many mountain gorillas live in the wild. Here's why

By Katerina Guschanski - The Conversation 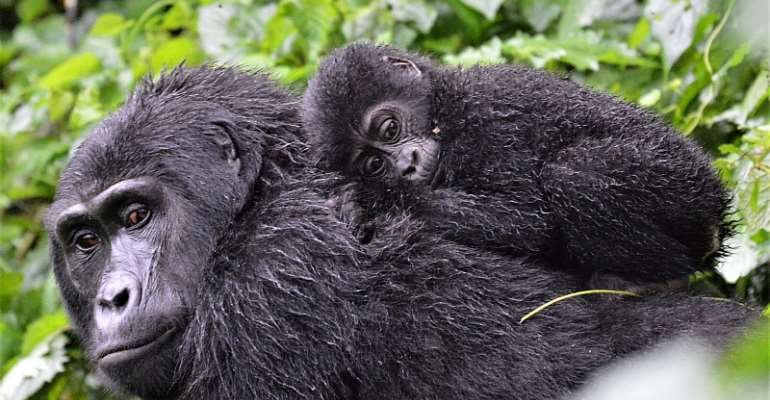 A new census – carried out by the Greater Virunga Transboundary Collaboration (a coalition of governments, non-profits and conservationists) in 2018 – shows that the population of mountain gorillas in Uganda's Bwindi Impenetrable Forest National Park is now at 459, up from 400 in 2011. This could bring the total number count for the subspecies to 1,069 gorillas. Katerina Guschanski explains that while this is great news, these figures may still not be accurate.

How important are the mountain gorillas of Uganda's Bwindi Impenetrable Forest National Park to global populations?

Mountain gorillas are one of the two subspecies of eastern gorillas. They are divided into just two populations: one in the Virunga Massif that spans the borders of Uganda, Rwanda and the Democratic Republic of Congo (DRC) and one population that lives in the Bwindi Impenetrable National Park in Uganda and the adjacent Sarambwe Nature Reserve in DRC.

The Bwindi population holds a bit less than half of all mountain gorillas in the world, thus its importance for the global survival of these great apes cannot be overstated.

Because there are only about 1,000 mountain gorillas left, it's important that their population size be continuously monitored to evaluate whether, and which, conservation tactics work.

Their populations must keep growing because mountain gorillas have very low genetic diversity. This reduces their ability to adapt to future changes in the environment. For instance, if faced with new diseases, they are extremely susceptible because they don't have genetic variants that would give them more resistance. Low genetic diversity was implicated in the extinction of some mammals, such as the mammoth.

Continued population growth is also needed to make them less vulnerable to random events, such as habitat destruction through extreme weather events, which could wipe out an entire population.

What can account for a rise in the number of gorillas?

One of the main factors that explains the higher detected number of gorillas is the change in the census technique used. During mountain gorilla censuses researchers collect faecal samples from gorilla nests (where they sleep at night) to genetically identify individuals. Gorillas that are used to human presence can be directly counted.

The teams in the latest census conducted two full systematic sweeps through the forest. They covered the entire region twice from east to west. This is a physically and logistically demanding method, but it's very thorough.

The previous census, carried out in 2011, also covered the area twice, but only one of these attempts was a full sweep – meaning it started at one end of the forest and systematically progressed towards the other end. The other sweep was disjointed, in terms of how it covered the area and the timing, allowing gorilla groups to easily move and avoid detection.

In Bwindi, from the estimated 459 individuals, 196 are in groups that are used to people and can easily be counted. This means that population estimates are largely based on genetic profiles generated from night nests and so can't be fully accurate because some will be missed.

Censuses of Virunga mountain gorillas are more accurate because more of their gorillas are used to human presence. In the most recent census, there's been a rise in their population. It shows an increase from 458 individuals in 2010 to 604 in 2016. Most of these gorillas – 418 out of 604 – belong to groups that are used to human presence, they can be followed daily and easily counted.

The population increases in the Virunga gorillas is strongly attributed to active conservation. This includes continuous monitoring and veterinary attention, such as the removal of snares and treatment of respiratory diseases.

Is this rise a significant number and how accurate do you think it is?

The Bwindi census results were made publicly available in a somewhat unusual way. Scientific studies generally undergo a thorough peer-review before they are published, which has not yet happened for these findings. This means the findings haven't yet been properly scrutinised and leaves the question about the gorilla's population size open.

In addition, as mentioned above, the larger number of individuals detected in the 2018 census could be the result of the changed survey method. We therefore can't make reliable comparisons to previous estimates from the 2011 and the 2006 censuses.

Consider that in the latest census, of the 33 gorilla groups – which weren't used to the presence of people – only 14 (or 42%) were detected during both sweeps. Similarly, only one of 13 solitary individuals was detected in both sweeps. So, even with full, systematic sweeps, more than half the groups and solitary individuals were missed every time.

This shows we still do not have a good understanding of the actual population size of Bwindi mountain gorillas. The previous surveys are likely to have missed multiple groups and individuals so we can't derive conclusions about population size changes. If another sweep were to be conducted, researchers could find more individuals, but that doesn't necessarily mean that the population has grown.

What we can say is that there are more mountain gorillas than we thought, which is great news.

What can be done to improve census methods?

Using the results of the two census sweeps in Bwindi, researchers will estimate the likely number of gorillas. The accuracy and precision of the estimate depends strongly on how many gorilla groups and individuals were detected in both sweeps.

To make census figures more concrete, more sweeps need to be included so that more individuals are confirmed. This would make the population size estimates more accurate with less uncertainty.