By Stig Jarle Hansen - The Conversation 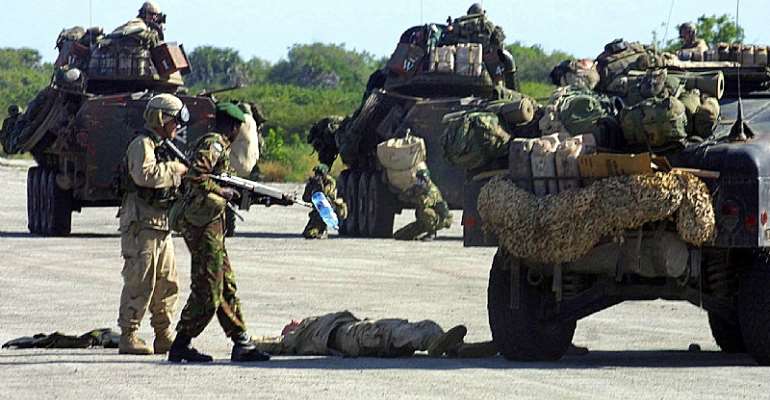 Kenyan military troops and US marines carry out a joint military exercise in Manda Bay near the coastal town of Lamu. - Source: EPA/Simon Maina

Two significant attacks have been carried out by al-Shabaab in recent weeks. On 6 January 2020, the Somali-based terrorist group attacked a Kenyan military base close to the former coastal holiday destination of Lamu. The killing of a US service man and two US contractors in this attack inflicted the first ever American military combat losses inside Kenya.

The target of the assault, Manda Bay base, serves as a forward reconnaissance base for the US and is used for its drone warfare against al-Shabaab. The base is part of the American “train, assist, and enable” strategy for supporting African allies in their struggle against local organisations affiliated with Al Qaeda and Islamic State. It is also home to parts of the US 475th Expeditionary Air Base Squadron.

The other attack was on 28 December when a bomb went off at a checkpoint used by vehicles entering Somalia's capital Mogadishu from the nearby city of Afgoye. Among the 85 killed in the attack were two Turkish engineers. Al-Shabaab claimed responsibility, saying the target had been a convoy of Turkish and Somali forces.

The two attacks, though different, shared some similarities: both targeted some of the group's main enemies outside the region, Turkey and the US. Al-Shabaab's global enemies have figured in its propaganda for more than a decade. Turks and Americans have been targeted before. And as recently as last year a US base in Somalia was targeted.

Al-Shabaab portrayed the Manda Bay attack as a direct response to the US administration's designation of Jerusalem as the capital of Israel. The group further claimed that the attack was conducted under the “guidance and direction” of Al Qaeda leader Ayman al-Zawahiri.

It is significant that these attacks come at a time when the US – as well as other western countries such as France – are increasingly discussing scaling down their military efforts against African extremist organisations, as well as drawing in new partners to share their burden.

Scaling back involvement is influenced by the failure to fully defeat any of the jihadist organisations on the continent. It is also informed by the fact that outfits such as al-Shabaab, Mali's Jama'at Nasr al-Islam wal Muslimin, as well as the Islamic State in West Africa choose local or regional targets. This makes them a smaller threat to European and north American countries.

The third factor is the Trump administration's insistence on sharing the international security burden among allies, and its reluctance to stage costly foreign interventions.

But the US and France still have each other, which could explain some changes in focus. For example, recent signals of a US scale down in West Africa but not in the Horn of Africa might be because of the French presence in that region. The US's heavy investment in some countries in the Horn might also make it less willing to scale down its engagement in those countries.

But France's unpopularity in the region, and the recent French talk of “burden sharing” mirroring the American rhetoric, signals that this solution also faces several dilemmas.

The two recent attacks highlight three dilemmas the US will face if it pursues a withdrawal strategy. The first is the increasing involvement of international players across the continent.

For example, Turkey has expanded its presence in Somalia while Qatar and the United Arab Emirates have expanded their engagement. The extent of this was reflected recently when Turkish papers as well as sources within Somali security services claimed that the Emirates where behind the 28 December bombing.

Such claims must be seen in the light of foreign rivalry, particularly between the UAE and Qatar.

Declining US involvement in the region will leave a vacuum that others can fill.

Last year, for example, Russian mercenaries were deployed to Mozambique to fight the Islamic State affiliated militias there.

China, which has a naval base in neighbouring Djibouti, might also fill the vacuum in the future.

The second dilemma the US faces is the fact that, although al-Shabaab and other African jihadist organisations don't launch attacks in Europe and the US, they do target US citizens, interests and investments in Africa.

On the issue of vulnerability the attacks demonstrate how non-military personnel, in this case Turkish engineers, can become threatened by local groups such as al-Shabaab. Some of these non- military activities will continue even if the US end their military efforts.

This is especially true as oil exploration in Somalia and the Horn is about to intensify. In this sense foreign citizens, including US citizens, are in harm's way also after an American withdrawal.

While foreigners are seemingly the target of the recent attacks, we must avoid concluding that this signifies a “globalisation” of al-Shabaab. The targets of the two attacks are far from atypical. The Manda Bay base is located in the county of Lamu, adjacent to the Boni forest and the Ras-Kamboni forests. This is an old hotbed of al-Shabaab activity, as well as older jihadist groups. It is a region in which the local Muslim population was hurt badly by land reforms during Jomo Kenyatta's presidency. This was in fact mentioned in al-Shabaab's statements on the Manda bay attack.

Indeed, the Manda Bay attack underscores the real problem of both US and French engagement in Africa: addressing local conflicts that jihadists can take advantage of. The lack of success in curtailing their activities stems partly from a neglect of local conflict dynamics and civilian protection.

The third dilemma is the humanitarian suffering created by jihadists in the region. This will not end with US withdrawal.

The three dilemmas will not disappear.

Stig Jarle Hansen does not work for, consult, own shares in or receive funding from any company or organization that would benefit from this article, and has disclosed no relevant affiliations beyond their academic appointment.

Government extends electricity to seven communities in Savan...
12 minutes ago