By Alexandra Novosseloff - The Conversation 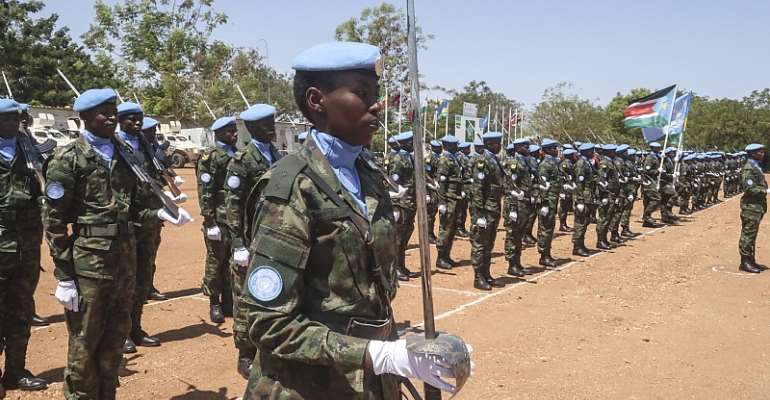 Rwandan soldiers line up to receive their UN peacekeeping medals for their work in Juba, South Sudan in 2019. - Source: Flickr

The United Nations' peace operations are changing. This is true of a range of operations, from special political missions and peacebuilding offices to multidimensional peace efforts.

This reflects the fact that the UN Security Council has always adapted to new forms of conflict and to new security environments, expanding the notion of security in its resolutions. As a result, peacekeeping has adapted to suit the purpose and methods of its time.

Until the end of the 1980s, peacekeeping was mainly a tool to help end interstate conflicts. These included the Suez crisis, the conflict between India and Pakistan and that between Israel and Syria over the Golan heights. The exceptions were civil wars in the Congo and Lebanon.

Since then, UN peacekeeping has become mainly an imperfect tool to help solve intrastate conflicts like those in Angola, Somalia, Cambodia and elsewhere. Exceptions have been the conflicts between Ethiopia and Eritrea in 2000 and the civil unrest in Haiti in 2004.

Peace operations are now becoming entangled in conflicts with regional and transnational dimensions. These very often involve a proliferation of armed groups (both rebel and criminal). Many are in conflict with the host countries. As a result, the relationship between peacekeepers and host states has been more complicated. Many don't see an interest in complying with the mandate of the UN, such as in the Democratic Republic of Congo under former president Joseph Kabila, or in Mali.

Moreover, peace operations have become, more than ever before, playgrounds for the political interests of China, France, Russia and the US, whether allied with regional actors or not. Some of the operations have become bases for creating new spheres of influence or strengthening existing ones, like in Central Africa and Mali.

This power struggle is not helping peace operations deliver on their various complex mandates.

For a few years now, UN peace operations have stood at a crossroads. Do they continue with expensive missions with little peace to keep, but which provide much-needed confidence and security in the world's most difficult contexts? Or do they opt for less ambitious and more achievable objectives, which would place more responsibility on other actors (national, regional, parallel forces) to shore up basic security in trying to find a path to peace?

In 2019, peace operations seem to have taken the second path, shifting away from large, multidimensional, “conflict management” operations. The reasons for this shift include political and budgetary pressures – the kind of investments member states and the Security Council are willing to make – as well as structural reforms.

The number of personnel deployed in UN peacekeeping has slowly been decreasing. In April 2015 the UN was responsible for 107,800 soldiers and police officers worldwide. It now has only 83,669 uniformed personnel deployed. Four missions have been closed – Côte d'Ivoire, Liberia and two in Haiti).

Despite this, the UN is today the second largest single deployer of troops in the world after the United States.

Divisions within the Security Council have also affected the delivery of mandates, and have weakened the relationships between various missions and their host states. As pointed out by Arthur Boutellis, a senior advisor at the International Peace Institute, in a recent paper, a number of peacekeeping missions did not enjoy unanimously supported mandates. And cracks have started to occur among the United States, the United Kingdom and France, all permanent members of the Security Council, on some missions.

UN bodies should recalibrate peacekeeping operations to accord with the level of investment member states are willing to provide. This would, according to UN Secretary-General António Guterres, help

to refocus peacekeeping with realistic expectations.

This means that multidimensional peacekeeping seems to be behind us as it has become too expensive for the UN. It contradicts the push for dramatic financial cuts to make peacekeeping more nimble.

The political missions that are likely to take over from the multidimensional missions in Darfur in Sudan, the Democratic Republic of Congo, Haiti and in Hodeida, Yemen all show the wide array of tools the UN has at its disposal, and the spectrum its conflict resolution and conflict management is covering.

As pointed out by a recent United Nations University report, another example is the task force established in Burkina Faso by the UN resident coordinator, the UN country team and the UN Office in Western Africa and the Sahel to reinforce conflict prevention and peacebuilding capacities in key areas. It is supported by the UN's Peace-building Fund. This example shows another innovative way the UN can work.

Such an approach is yet more proof of the adaptability of the UN system. As was the effort in Guinea, Sierra Leone and Liberia to deal with the Ebola pandemic in 2014–2015 – the UN's first emergency health mission. Another is the strengthened coordination established in the Beni region of the DRC with the World Health Organisation in May 2019.

This breadth of tools and this spectrum of crisis resolution and management is an asset that makes the UN unique. It enables a truly global approach in dealing with crises and conflicts. The more the UN is able to use these tools and the systems attached to them, the more flexible it will be in adapting to evolving challenges.

The transitions in Haiti and Darfur, and the evolving situation in Burkina Faso, will serve as a reality check for the new secretariat's nimble approach to maintaining international peace and security.

This article is a shortened version of the one published in December 2019 for the NYU Center on International Cooperation's Peace Operations Review 2019.

Alexandra Novosseloff is a non resident senior fellow at the International Peace Institute and at the NYU Center for Cooperation. She is also an independent consultant on UN issues.