By Mary de Haas - The Conversation 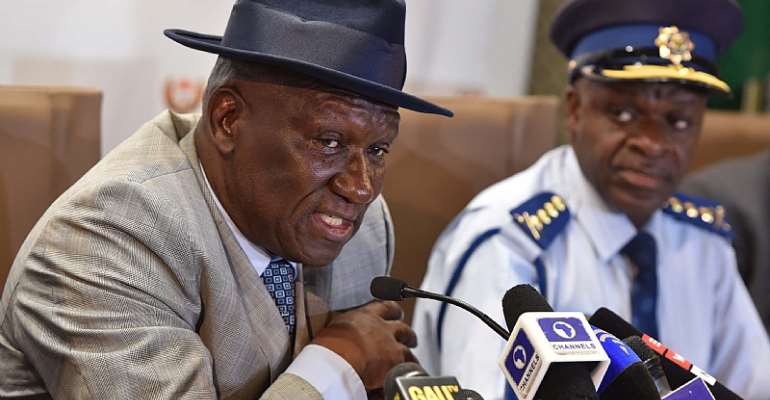 South African police minister Bheki Cele (left) claims success in the investigation of political killings in KwaZulu-Natal. With him is the head of the police, Khehla Sithole. - Source: GCIS

The assassination of political figures in South Africa has a long and horrible history. That the practice has continued since the country became a democracy is deeply disturbing.

Research by the Global Initiative Against Transnational Organised Crime between 2000 and 2017 ranked one province in South Africa – KwaZulu-Natal – well ahead of the other eight provinces in killings of people in the political sphere and the taxi industry.

I have conducted anthropological research on political violence in the province since 1983. My work has been of a qualitative nature, using information obtained from my own research networks, interventionist work with the police, and media reports.

My work, among other things, confirms the close links between political and taxi violence in the province, with taxi hitmen often deployed in political attacks. It is a cause for great concern that despite the availability of information about such activities, little progress has been made in bringing perpetrators to justice.

In May 2018 President Cyril Ramaphosa formed a national inter-ministerial investigative team drawn from different parts of the country to investigate the killings. Its work has stirred controversy, amid allegations it has been selective when making arrests. Questions have been raised about the quality of its investigations, which have had little impact on exposing those behind the violence.

The nature of political killings

According to my statistics, around 90 people with some official standing have been killed in KwaZulu-Natal since 2015. They were either municipal councillors, political party officials or, in a few cases, senior municipal officials. Most of the deceased were affiliated to the African National Congress (ANC), the party that governs both the province and the country.

This figure is bound to be an under representation of the situation as not all such deaths are reported. Also, the figure does not include over 100 murders in Durban's Glebelands hostel, which was built during the apartheid era to house male migrant workers, but is now home to 22,000 people, including families.

Prominent municipal employees are included in the deaths because of links between corruption and killings confirmed by a commission set up in 2016 to investigate political violence in KwaZulu-Natal.

Many of the deaths have been linked to intra-ANC politics. But the motive may not necessarily be political. For example, a death could be linked to the taxi business, known for its high levels of violence and assassinations. The violence, as my own research confirms, is usually linked to fierce competition over routes.

What's common to all the deaths is that the violence is motivated by a battle over scarce resources. For example, prior to elections, competition over candidature might have been a motive, as seen in the spike in killings ahead of the 2016 local government elections. Becoming a councillor guarantees a lucrative salary in all working class wards.

The inter-ministerial task team investigating the political killings started work on over 100 dockets in mid-2018. Over a year later, the only known high profile conviction for any of the 90 murders I documented was secured by KwaZulu-Natal detectives in March 2019 for a 2016 murder.

There may well have been convictions for the murders of less well known victims in regional courts which have not been reported. But none have been reported for the many prominent victims during this period.

This hasn't stopped the police minister, Bheki Cele, from claiming that the task team has had many successes and secured several life sentences. He has failed to provide full details of these convictions.

From my personal experience, it has become increasingly difficult to obtain information from the South African Police Service about progress in criminal investigations.

I have also experienced a lack of transparency relating to the structure of the task team itself, including who commands it.

I have been able to establish that many people have been arrested. Some have been released without being charged while others have had charges withdrawn after appearing in court. Sindiso Magaqa, a municipal councillor in Umzimkhulu, KwaZulu-Natal, paid the price for opposing tender fraud. African News Agency Archive.

A number of examples of high profile cases – some of which were included in the dockets taken by the task team – show how the justice system is failing to conclude cases. These include:

These high profile arrests, followed by subsequent withdrawal of charges, have led to charges by the provincial ANC and the South African Communist Party of political partisanship and shoddy work by the task team.

In the absence of empirical evidence to substantiate claims by the minister of police about convictions secured by this team, the inevitable conclusion is that their deployment is a waste of scarce criminal justice resources.

The Natal Monitor Research Project Mary de Haas was part of at the University of Natal received funding from Norwegian People's Aid between 1995 and 2005. She is affiliated with MeRAN, a small self-funded voluntary non-profit organisation of bioethicists working on medical rights.

By Mary de Haas, Honorary Research Associate in the School of Law, University of KwaZulu-Natal