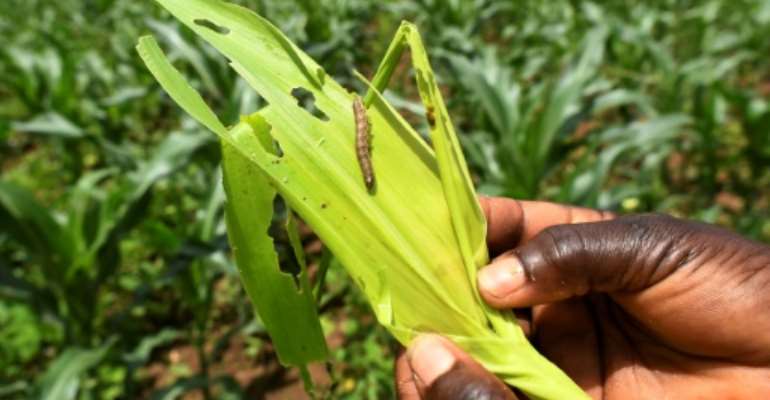 The fall armyworm, an invasive species from the Americas, has now spread across almost all of Africa, according to UN food experts. By SIMON MAINA, SIMON MAINA (AFP)

An invasion of crop-munching fall armyworm caterpillars has inflicted a further blow to food security in Malawi, where nearly two million people have already been hit by drought, the government said Wednesday.

The invasion has hit 467,000 farmers in all 28 farming districts in the southern African country, according to the latest statistics.

Around 144,000 hectares (355,000 acres) of crops have been hit, a figure nearly triple that of 2017, when President Peter Mutharika declared a state of disaster after 20 districts were affected.

"The level of damage is moderate to severe and in some fields, farmers require replanting," he said.

Around 1.9 million people are already struggling with food shortages as a result of a drought that has gripped much of southern Africa.

Government is distributing pesticides to help the farmers control the infestation.

The fall armyworm caterpillar is the larva of a moth (Latin name Spodoptera frugiperda) that is native to warm regions of the Americas and can fly up to 100 kilometres (60 miles) a night, according to the UN's Food and Agricultural Organization (FAO).

The species was first detected in central-western Africa in early 2016 and "then quickly spread across virtually all of sub-Saharan Africa," the FAO says on its website