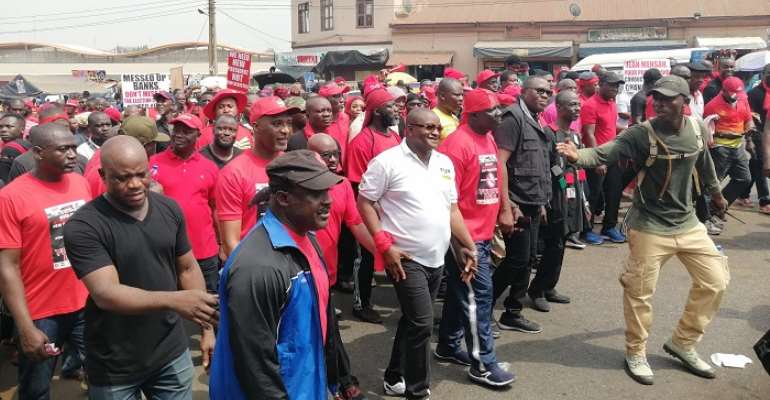 The Inter-Party Resistance Against New Voters' Register has suspended further demonstrations against the Electoral Commission's decision.

The National Chairman of the biggest opposition party, the National Democratic Congress (NDC), Samuel Ofosu-Ampofo disclosed this on Tuesday as the coalition ended a protest march in Kumasi.

Mr. Ofosu-Ampofo said the temporary halt is to give enough time for the Electoral Commission to complete its consultations on its controversial decision to compile a new voters' register.

Citing a committee of eminent persons the EC put together to advise it, Mr Ofosu-Ampofo said the NDC and its allies in the coalition respect the constituents of the committee and will, therefore, wait on their advice.

Addressing protestors at the end of the demonstration in Kumasi dubbed, 'Yempene' an Akan expression which means 'we won't agree,' the NDC stalwart said they would wait for the EC's decision after the said consultations and decide their next line of action.

Already, the Inter-Party Resistance Against New Voters' Register has successfully held two demonstrations; Tuesday's and an earlier one in the Northern Regional capital, Tamale.

The coalition has accused the electoral governing body of frivolous expenditure, stressing that there is no need for a new voters' register.

The EC, on the other hand, says the current register is not fit for purpose.

According to the commission, the Biometric Verification Devices linked to the current register are either faulty or spoilt.

Refurbishing them for the December elections is not a reliable option, the EC says.

However, the Inter-Party Resistance Against New Voters' Register and some 18 civil society groups that back their demand say the EC's reasons for wanting to compile a new register are not convincing.

Meanwhile, the governing New Patriotic Party having has demanded a new register since 2013 following fallouts from the 2012 election dispute, is among a few parties backing the EC's decision.